He was received by Pakistan's Adviser on Commerce Abdul Razak Dawood and other officials after which Ghani was given a 21-gun salute. 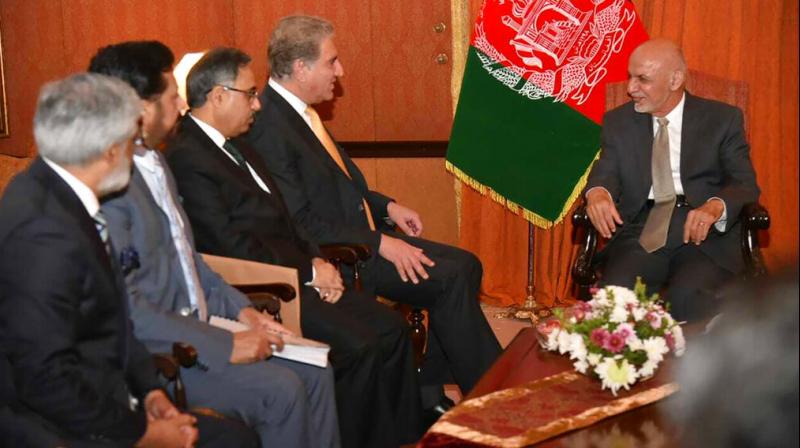 Ties between Islamabad and Kabul have never been smooth and there have always been issues in mutual relations mainly due to historical distrust between them. (Photo: AP)

Islamabad: Afghan President Ashraf Ghani arrived on a two-day visit in Islamabad on Thursday in an effort to normalise bilateral ties and boost the peace process in the war-torn country. He was received by Pakistan's Adviser on Commerce Abdul Razak Dawood and other officials after which Ghani was given a 21-gun salute.

This is Ghani's third visit to Pakistan and follows the recently held first review session of the landmark Afghanistan-Pakistan Action Plan for Peace and Solidarity. A 57-member Afghan delegation took part in the conference on Afghan peace held here. Pakistan had during the event reiterated its resolve to support efforts to bring peace in the war-torn Afghanistan.

The Pakistan Foreign Office said that the Afghan President is accompanied by a high-level delegation, including Ministers, advisers, senior officials and businessmen. During his visit, Ghani will hold delegation-level talks with Prime Minister Imran Khan on wide-ranging issues, including strengthening bilateral cooperation in areas like politics, trade, economic, security, peace and reconciliation, education as well as people-to-people exchange.

He will also hold a meeting with his Pakistani counterpart Arif Alvi. President Ghani will also travel to Lahore where he will participate in a business forum attended by business representatives from both the countries.

He is visiting at an important time when efforts for peace in Afghanistan have entered a crucial phase, according to officials. Earlier this month, US special representative for Afghanistan reconciliation, Zalmay Khalilzad held discussions with the Pakistani leadership, including Prime Minister Imran Khan, on the Afghan peace process and the positive steps that Pakistan can take to advance it.

Of late, bilateral relations between Pakistan and Afghanistan nosedived after several terrorist attacks in Pakistan in which Afghan nationals were found involved — leading subsequently to the closure of the Durand Line border between the two countries, The Express Tribune reported.

Ties between Islamabad and Kabul have never been smooth and there have always been issues in mutual relations mainly due to historical distrust between them.