A man who suffered a head injury was in serious condition, according to police. 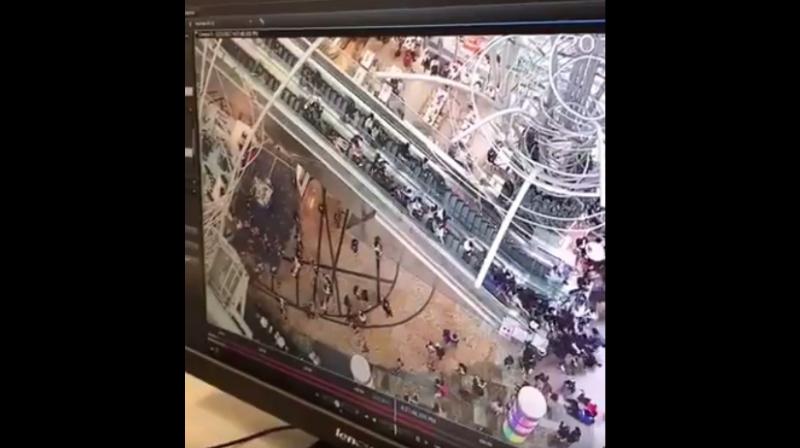 The Otis Elevator Company, has been asked to investigate the cause of the accident. (Photo: Screengrab)

Singapore: At least 18 people were injured Saturday afternoon when an escalator at a shopping mall of Hong Kong‘s Langham Place suddenly reversed direction and increased speed.

Video footage shot by witnesses showed that an upwards escalator suddenly reversed and went downward at an obviously higher speed, leading to dozens of passengers losing their balance and tumbling down to the ground.

Several ambulances rushed to the scene and took the injured to nearby hospitals.

A man who suffered a head injury was in serious condition, according to police.

RTHK quoted an expert in escalator maintenance of Hong Kong’s Vocational Training Center as saying that this kind of accident rarely happens in Hong Kong and may be attributed to the malfunction of the escalator‘s anti-reversal gear and auxiliary safety gear.

A spokeswoman of the shopping mall in bustling Mong Kok and a director of the mall’s property management company said the escalator has been in service for years with a fine record of operation.

It passed a recent inspection on March 23, showing no signs of mechanical defects or falling short of safety standards.

The contractor for maintaining the escalator, the Otis Elevator Company, has been asked to investigate the cause of the accident.

“We are urging the Otis Elevator Company to thoroughly probe into the accident, in concerted effort with the police, the fire department and other government sectors,” said Mr. Chao, general manager of Hong Kong’s Langham Place, Great Eagle Holdings Limited.