China, Pak plan to extend economic corridor to include Afghanistan

The development came after the first trilateral meeting between the foreign ministers of the three countries. 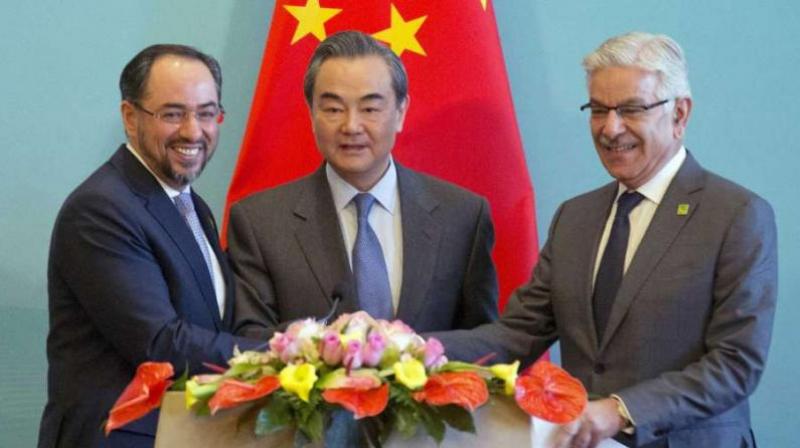 The China-Pakistan Economic Corridor or CPEC, which passes through Pakistan-occupied Kashmir (PoK), is part of China's ambitious Belt and Road plan to link China with Asia, Europe and beyond.

China tries to position itself as a 'helpful party' in talks between Pakistan and Afghanistan, both uneasy neighbours since 1947, when Pakistan was created after the division of India when it gained independence from Britain.

Ties between Afghanistan and Pakistan have soured in recent years as Kabul blames Islamabad of supporting and funding Taliban terrorists, who are responsible for repeated attacks in Afghanistan.

Pakistan's main objective, Kabul says, is to limit the influence of India in Afghanistan.

Pakistan denies this and instead, claims innocence in attacks carried out by terrorists who cross the Pak-Afghan border.

Speaking after the first trilateral meeting between the foreign ministers of China, Pakistan and Afghanistan, Mr Wang said China hoped the economic corridor could benefit the whole region and act as an impetus for development.

Afghanistan has an urgent need to develop and improve people's lives and hopes it can join inter-connectivity initiatives, Mr Wang told reporters, as he announced that Pakistan and Afghanistan had agreed to mend their strained relations.

"So China and Pakistan are willing to look at Afghanistan, on the basis of a win-win, mutually beneficial principles, using an appropriate means to extend the China-Pakistan Economic Corridor to Afghanistan," he added.

How that could happen needs the three countries to reach a gradual consensus, tackling easier, smaller projects first, Mr Wang said, without giving any details.

Pakistani Foreign Minister Khawaja Asif said his country and China were "iron brothers", but did not directly mention the prospect of Afghanistan joining the China-Pak corridor.

"The successful implementation of CPEC (China-Pakistan Economic Corridor) projects will serve as a model for enhancing connectivity and cooperation through similar projects with neighbouring countries, including Afghanistan, Iran and with central and west Asia," he said.

India has protested the CPEC project as it runs through Pakistan-occupied Kashmir, which India maintains is part of Jammu and Kashmir, its northernmost state, and therefore Indian territory.

Chinese Foreign Minister Wang Yi however, claimed that the plan had nothing to do with territorial disputes.

Pakistan's only link to China is through Pakistan-occupied Kashmir. It is India and Afghanistan who share a border, now cut-off by Pakistan's forceful occupation of PoK.

China has sought to bring Kabul and Islamabad together partly due to Chinese fears about the spread of terrorism from Pakistan and parts of Afghanistan to the unrest-prone far western Chinese region of Xinjiang.

As such, China has pushed for Pakistan and Afghanistan to improve their own ties so that they can better tackle violence and terrorism in their respective countries, and has also tried to broker peace talks with Taliban, to a limited effect.

A tentative talks process collapsed in 2015.

China's Belt and Road infrastructure drive aims to build a modern-day "Silk Road" connecting China to economies in Southeast and Central Asia by land and the Middle East and Europe by sea.