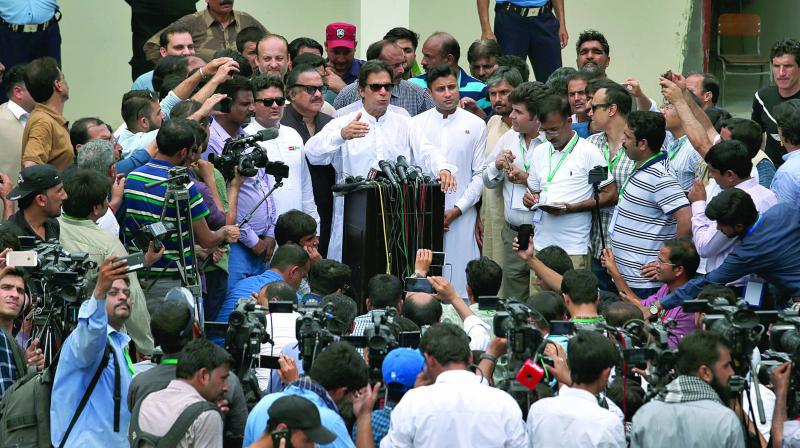 Islamabad: Imran Khan's Pakistan Tehreek-e-Insaf today inched closer to becoming the single largest party in the country's general elections by leading on 119 seats in an early count of votes, amid charges of rigging by rival political parties.

In the eastern city of Lahore, capital of Punjab province and the country's political heartland, PTI supporters rejoiced by waving flags and raising party slogans as results trickled in after the voting yesterday.

The 65-year-old former cricketer's PTI was ahead in 119 of 272 contested National Assembly constituencies, while its main rival Pakistan Muslim League-Nawaz (PML-N) was way behind with 65 seats.

The Pakistan People's Party was leading on 44 seats while others were ahead in 17 seats. The Election Commission of Pakistan (ECP) officially announced the first result at 4 am.

While final results are expected in the coming hours, initial outcomes show that the PTI would emerge as the single largest party in the National Assembly.

Pakistan's National Assembly comprises a total of 342 members, of which 272 are directly elected whereas the rest - 60 seats reserved for women and 10 for religious minorities - are selected later through proportional representation among parties with more than five per cent of the vote.

A party can only form the government if it manages to clinch 172 seats in total. A single party will need at least 137 of the directly elected seats to be able to form the government on its own. The PML-N and the PPP, both raised questions on the transparency of the vote counting process, alleging their polling agents were not allowed to verify vote counts as is mandated by law.

PML-N president Shehbaz Sharif, who is hoping to become the next prime minister after the jailing of his brother and former prime minister Nawaz Sharif in a corruption case, outrightly rejected the election results, alleging "blatant" rigging.

He did not say who he believes could have rigged the polls, but allegations of manipulating the elections have been made against the country's influential military.

"Some five other parties including the PPP have raised the rigging issue in polls. After consulting them, I will announce the future course of action. Pakistan has suffered today," he told journalists at a press conference.

"We will fight this injustice and use all options," he said, adding that there has been a "blatant violation" of the mandate. No statement has been issued by Khan. His spokesperson Naeemul Haque, however, tweeted that the PTI chief will address the nation today at 2pm "in

celebration and recognition of the massive support received from the people of Pakistan in the 2018 elections which was a contest between the forces of good and evil".

The ECP rejected the "blatant" rigging allegations. In an unusual press conference early today, Chief Election Commissioner Muhammad Raza Khan congratulated the people of Pakistan for participating in the election process. He, however, acknowledged that the delay in announcement of election results has "caused some annoyance".

He stressed the delay was on account of a new system - Results Transmission System - introduced by it. Asked about the doubts and the allegations, he said: "We will prove ourselves that we did our job right."

"These elections were fair and we have not received any complaint. If anyone has proof, we will take action," he said.