Most victims were trying to collect the spilled oil when the fuel caught fire and exploded. 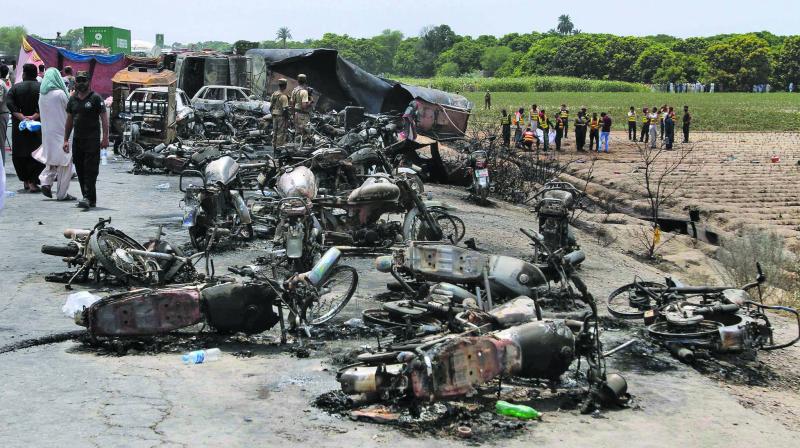 Pakistan Army soldiers stand guard while rescue workers examine the site of an oil tanker explosion at a highway near Bahawalpur, in Pakistan. (Photo: AP)

Islamabad: More than 151 people were killed and scores injured in a fire that broke out after an oil tanker overturned in Pakistan’s Bahawalpur district on Saturday.

The tragedy came a day before Eidul Fitr celebrations in the country, which marks the end of the fasting month of Ramazan.

The incident happened after a tanker — going from Karachi to Lahore — carrying 40,000 litres of fuel overturned on a main highway near the town of Ahmadpur East in the Punjab province.

Most victims were trying to collect the spilled oil when the fuel caught fire and exploded, resulting into killings and burn injuries.

On the instruction of Pakistan Army Chief Qamar Javed Bajwa, four helicopters were deployed to rush the injured to hospitals in Multan, Bahawalpur and other cities. As many as 65 injured people were shifted to Nishtar Hospital Multan, though two of them died after they reached the hospital. The process of the identification of the injured and those died was underway till filling of the report.

“At least 151 people were killed before getting any medical help while the rescue officials shifted more than 140 injured to the district headquarters hospital and Victoria Hospital in Bahawalpur where the condition of most of them is critical,” Mr Afzal said, adding some 50,000 litre petrol spilled from the oil tanker. He said women and children are among the victims. Rescue official Jam Sajjad said 151 people were killed in the fire and the toll may rise further as a number of injured are in critical condition. He said most of the dead bodies are completely charred and they will be identified only by DNA test.

PM Sharif directed provincial administration to provide the best possible medical facilities to the injured. The Punjab CM ordered an inquiry and sought a report from the authorities.

Chinese President Xi Jinping has condoled the loss of lives in the tragic incident. “The people of China stand by the Pakistani people in this tragic hour,” he said.

Speaking to media after offering Id prayer in London, he expressed his grief and condolences. Pakistan has an appalling record of fatal traffic accidents due to poor roads, badly maintained vehicles and reckless driving.

At least 62 people including women and children were killed in southern Pakistan in 2015 when their bus collided with an oil tanker. The country has also long struggled to alleviate a chronic energy crisis, with regular blackouts crippling industry and exacerbating anger against the government.

Many Pakistanis were already unnerved by a series of deadly militant attacks across the country Friday, with officials Sunday increasing the death toll from the assaults in three cities to a total of 69.