Coronavirus lockdown leads to rise in domestic violence in Iraq 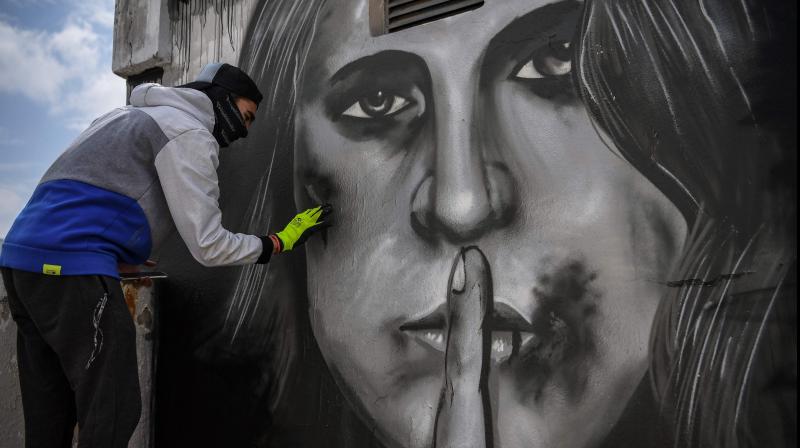 Graffiti art inspired by the increase in cases of domestic violence amid a lockdown aimed at curbing the spread of the COVID-19 pandemic. (AFP)

The nationwide lockdown since mid-March is meant to keep coronavirus cases down in the country, but it has led to a spike in another sad statistic: domestic violence.

The head of Iraq's community police, Brigadier General Ghalib Atiyah, told media that its log of domestic violence cases has increased by an average of 30 per cent since the curfew came into force -- with some areas seeing as high as a 50-per cent spike.

In a single week, the United Nations in Iraq (UNAMI) reported: "The rape of a woman with special needs, spousal abuse, immolation and self-immolation as well as self-inflicted injuries due to spousal abuse, sexual harassment of minors, and suicide due to domestic abuse among other crimes."

In the southern province of Wasit, a 58-year-old doctor killed his wife after she refused to let him sell land that she owned, according to human rights lawyer Sajjad Hussein.

To the north in Samarra, footage surfaced of a 10-year-old girl in tears, her arms apparently broken.

"I don't want to see my dad any more, he hits me every day," says the child, identified as Saba.

"He tells us it's to 'educate us,'" her mother, who is divorced, is heard saying.

But Malak al-Zubeidi's case made waves.

Eight months ago, the young woman in the shrine city of Najaf married a policeman who physically abused her and barred her from seeing her family, Malak's mother told Human Rights Watch (HRW).

On April 8, he beat Malak so badly she doused herself in gasoline and set herself on fire, her mother said, burning for several minutes before her father-in-law put out the flames.

Footage of her swollen, burned face and pained wails in the hospital went viral, but public support could not save her: the young woman died 10 days later.

"All Malak wanted was to be able to see her family," said Hana Edwar, a longtime women's rights advocate in Baghdad.

Her NGO, Amal (hope in Arabic), has documented a "dramatic" rise in domestic violence cases during the curfew, she told media.

"Everyone is spending long periods of time together inside the house. The most insignificant thing can turn into a controversy that eventually leads to violence," she said.

Extended families often live together in one household in Iraq, swathes of which still hold on to conservative religious and tribal customs.

In those areas, many girls are married at a young age and subject to domestic violence.

According to the UN, 46 per cent of married women in Iraq have survived some form of abuse at home, of which a third report physical and sexual assault.

They have few pathways to seek help.

A recent survey by the International Organisation for Migration found that 85 per cent of men in Iraq would bar female relatives from filing a police report.

And 75 per cent of female respondents admitted they would not feel comfortable reporting to the police, likely fearing possible additional abuse and the cultural stigma in Iraq surrounding women entering stations alone.

The community police have work to do to erase that taboo but cannot reach out to communities through its usual town halls because of the curfew, Atiyah told reporters.

There are also few shelters available for victims and legal accountability seems far-fetched.

Article 41 of Iraq's penal code gives men the right to "punish" their wives and children "within the limits of law and customs", a clause frequently used to dismiss cases brought against relatives.

Many abuse cases are "resolved" in tribal courts, which have their own legal framework that includes settlements to aggrieved families outside of official tribunals.

And "honour killings", or violence meted out extrajudicially against someone who broke a social norm, are usually met with light sentences by Iraqi courts.

After the public outcry over Malak, three of her male relatives were slapped with six-month jail sentences for "failing to assist someone in danger".

"Every time, MPs bring up religion's role or pretend they're worried such cases would clog the courts," said advocate Afrah al-Qaisi.

"It's a total impasse," she told AFP.

Now, the UN and HRW have seized on the wave of abuse under lockdown to point a spotlight at the issue.

"It should not take a global pandemic for Iraqi legislators to address the other deadly pandemic of domestic violence, but failure to do so will cost more lives," HRW's Belkis Wille said.