India's 'dream' of isolating Pakistan will never be fulfilled: Qureshi

Addressing a conference on Kashmir in Islamabad, Qureshi said a number of foreign dignitaries were to visit Pakistan in near future. 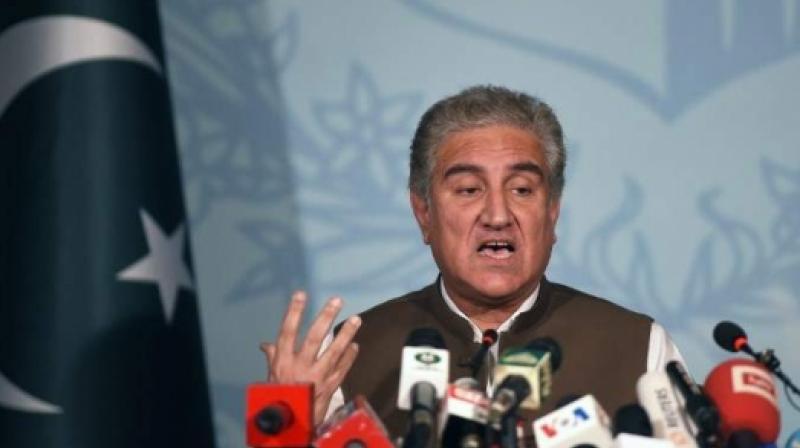 The international community led by the US pressed Pakistan to deny safe haven to terror groups. (Photo:AFP)

Forty Central Reserve Police Force (CRPF) personnel were killed on February 14 in Jammu and Kashmir when a suicide bomber of Pakistan-based terror group Jaish-e-Mohammad (JeM) rammed an explosive-laden vehicle into their bus in Pulwama district, sparking outrage in the country.

Addressing a conference on Kashmir in Islamabad, Qureshi said a number of foreign dignitaries were scheduled to visit Pakistan in near future. Malaysian Prime Minister Mahathir Muhammad will be the chief guest on Pakistan Day Parade on March 23, he said.

He said German Foreign Minister Heiko Maas will pay the visit on March 12 and the EU High Representative will also visit Islamabad soon. Qureshi said India's "dream" of isolating Pakistan will never be fulfilled. India launched a major diplomatic offensive against Islamabad after the Pulwama attack and highlighted Pakistan's role in using terrorism as an instrument of state policy.

The international community led by the US pressed Pakistan to deny safe haven to terror groups operating form its soil and bring the perpetrators of the Pulwama attack to justice. Qureshi said Pakistan was not in favour any conflict with India. Talking about the heightened tensions after the Pulwama attack, he said India's response was predictable.

"It behaved in the same manner as it did after Mumbai attacks," he said. The Foreign Minister said Prime Minister Imran Khan offered help in probe the sucide attack and also announced that Pakistan would not allow its soil to be used against any country.

He said Prime Minister of Pakistan has made it clear that Islamabad would retaliate to any action by New Delhi. Qureshi said action was being taken against extremists in the light of National Action Plan, a 20-point agenda to eliminate militancy.

India has asked Pakistan to take immediate and verifiable action against terrorists and terror groups operating from territories under its control. New Delhi also announced the withdrawal of the Most Favoured Nation status for Pakistan and hiked the customs duty by 200 per cent on goods originating from Pakistan.