The nation has been held up as a model of how to combat the virus, but Friday saw a record 1,241 new infections 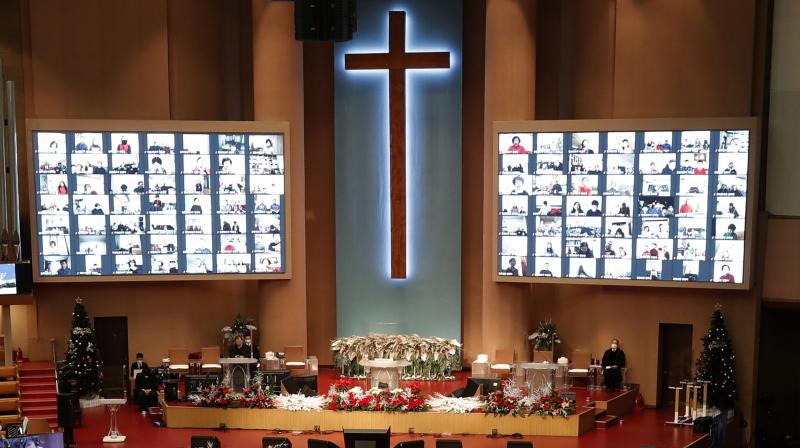 Christians on the screen attend an online Christmas service for social distancing and a precaution against the coronavirus at the Yoido Full Gospel Church in Seoul, South Korea, Friday, December. 25, 2020. (AP/Lee Jin-man)

Seoul: South Korea reported its highest daily number of coronavirus cases on Friday, as the country's Christmas celebrations were marred by a harsh third wave of Covid-19.

The nation has been held up as a model of how to combat the virus, with the public largely following official guidelines, but Friday saw a record 1,241 new infections.

"We strongly recommend and request that you cancel all of your meetings and gatherings, even with your close family members," said Yoon Tae-ho of Central Disaster Management Headquarters.

Seventy percent of the fresh cases came from the greater Seoul area, home to half the country's 52 million people.

In an attempt to contain the rising infection numbers, from Wednesday private social gatherings of more than four people in the greater Seoul area were banned until January 3 by officials.

Churches have switched to online masses or small-scale services, and ski resorts and national parks have been shut down nationwide.

At Yoido Full Gospel Church in Seoul, one of the biggest Protestant churches in South Korea, only about 15 staff, choir members and a pastor -- all masked -- attended its Christmas service, which was broadcast online.

"Normally our church venue can house up to 12,000 people," Park Jae-woo, a member of the church, told AFP, describing not being able to celebrate in person with others as "heartbreaking".

"But we fully understand that social distancing rules are necessary to protect lives."

Only 15 Catholic believers were allowed to attend Christmas mass at Myeongdong Cathedral in central Seoul, and they had to make a reservation in advance to take part.

Those who couldn't get a spot were seen praying outside the cathedral, wearing masks, in front of the statue of the Virgin Mary.

South Korea has been expanding its mass testing programme -- providing tests for free in the greater Seoul area until January 3 -- and more than 118,000 tests were conducted on Thursday alone, authorities said.

New cases have also emerged from various venues and communities in recent weeks, including long-term care facilities, a prison, army units, churches and schools, while hospitals in the capital area have been struggling with ICU bed shortages.