The roughly 8,500 elite police and paramilitary troops in riot gear began clearing the 2,000 or so demonstrators soon after dawn. 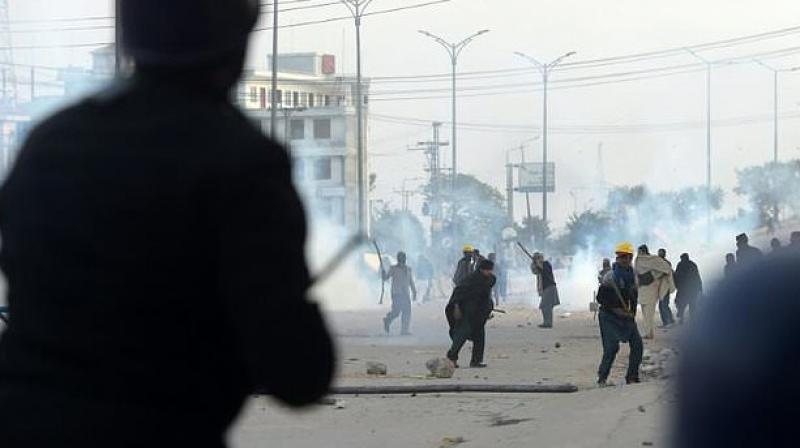 Islamabad: Pakistani forces fired rubber bullets and lobbed tear gas at protesters in Islamabad on Saturday as they moved to disperse an Islamist sit-in that has virtually paralysed the country's capital for weeks.

The roughly 8,500 elite police and paramilitary troops in riot gear began clearing the 2,000 or so demonstrators soon after dawn, with nearby roads and markets closed.

The sit-in by the little-known hardline group called Tehreek-i-Labaik Ya Rasool Allah Pakistan has blocked a main highway used by thousands of commuters since November 6, causing hours-long traffic snarls and enraging commuters.

The protesters are demanding that Pakistan's law minister Zahid Hamid resign over a hastily-abandoned amendment to the oath that election candidates must swear.

Demonstrators have linked it to blasphemy -- a highly contentious issue in Muslim Pakistan -- and claim the oath was softened to enable the participation of Ahmadis, a long-persecuted Islamic minority sect.

AFP reporters at the scene said small scuffles had broken out as protesters hurled rocks at police. Others were detained as security forces began to clear the site. Some ambulances could be seen in the area but it was not clear if there had been any injuries.

Television images showed people standing on top of freight containers that had blocked the roads around the sit-in, and plumes of smoke filling the air.

An Islamabad police official said that the operation sought to avoid any loss of life on either side.

The sit-in has already cost the life of at least one eight-year-old child whose ambulance could not reach a hospital in time due to the blocked roads, a statement from Pakistan's Supreme Court confirmed this week.

Despite the protest's relatively small size, authorities have hesitated to act against it, citing fears of violence as the demonstrators have vowed to die for their cause.

But government inaction has drawn the fury of the courts as well as millions of residents in Islamabad and neighbouring Rawalpindi. The Supreme Court and the Islamabad High Court have issued blistering criticism and threatened to hold officials in contempt for their inaction.

Analysts and critics have accused the government of bungling its response to the protest, and allowing a minor issue to grow into a headline-grabbing and potentially dangerous situation.

It set an alarming precedent, that "anytime anyone is upset with the government, the capital may be choked and the government will bend its knees," warned Zeeshan Salahuddin of the Center for Research and Security Studies, a think tank in Islamabad.