The suspension of TV channels was ordered for violating media regulations showing live coverage of a security operation. 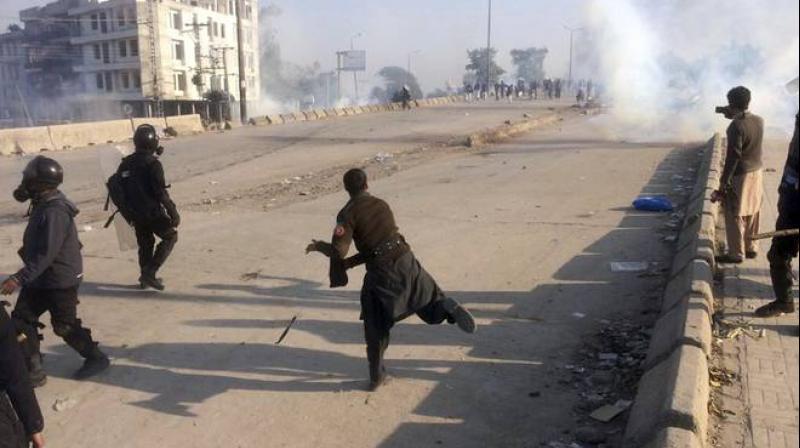 About 2,000 activists have been blocking the Islamabad Expressway and Murree Road that connect Islamabad with its only airport and the garrison city of Rawalpindi for more than two weeks. (Photo: AP)

Islamabad: Over 70 people, including security personnel, were injured on Saturday in clashes in Pakistan after police and paramilitary forces launched an operation to disperse protesters who have been occupying main highways leading to the capital Islamabad.

The operation was launched after Islamabad High Court (IHC) on Friday issued contempt of court notice against Interior Minister Ahsan Iqbal for failing to implement orders to clear the roads.

About 2,000 activists of Tehreek-i-Khatm-i-Nabuwwat, Tehreek-i-Labaik Ya Rasool Allah (TLYR) and the Sunni Tehreek Pakistan (ST) for more than two weeks have been blocking the Islamabad Expressway and Murree Road that connect Islamabad with its only airport and the garrison city of Rawalpindi.

The protesters demand the resignation of law minister Zahid Hamid for changes made about Khatm-i-Nabuwwat or finality of prophethood oath in the Elections Act 2017 passed in September.

More than 70 people have been injured. They were shifted to hospital of twin cities of Islamabad and Rawalpindi, a health official said.

Those injured include also more than 35 security personnel who were hit by stones thrown by protesters, the official said.

Pakistani authorities also ordered private television channels to go off air on Saturday during the crackdown.

The suspension was ordered by the Pakistan Electronic Media Regulatory Authority for violating media regulations showing live coverage of a security operation, a statement from the regulator said.

Islamabad city magistrate on Friday issued a warning to protesters to disperse by midnight or face the consequences.

Dozens of them were arrested and shifted to various police stations.

Some of the security personnel were injured due to stone pelting by protesters.

According to a security official, more than 8,000 security personnel took part in the operation against around 2,000 protesters.

The operation was still going on and police were facing stiff resistance from the protesters.

Earlier, IHC last Friday had given a 24-hour deadline to the government to clear the roads which was later extended till Thursday.

However, the court yesterday expressed strong displeasure at the government for failing to take action against the protesters.