At least five people had been killed in the districts of Barguna, Narail, Sirajganj and the island district of Bhola 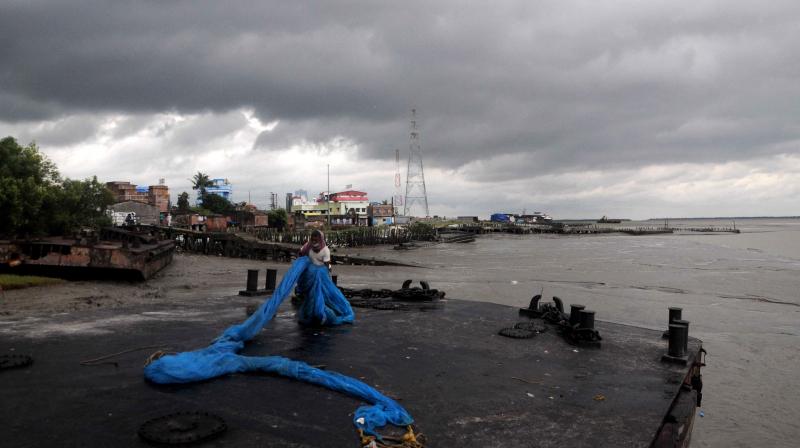 Dark clouds hover in the sky as a fisherman folds his fishing net, ahead of the landfall of Cyclone Sitrang, in South 24 Parganas district. (PTI Photo)(

The storm was moving swiftly over the country's southern region and its outer bands were already impacting Dhaka, hundreds of kilometers away from the Bay of Bengal, with trees uprooted and roads flooded in the capital.

At least five people had been killed in the districts of Barguna, Narail, Sirajganj and the island district of Bhola, disaster ministry control room spokesman Nikhil Sarker told AFP.

"The casualties may rise as we are hearing from our officials from some other districts as well," he said.

Cyclones -- the equivalent of hurricanes in the North Atlantic or typhoons in the Northwest Pacific -- are a regular and deadly menace on the coast of the northern Indian Ocean where tens of millions of people live.

But scientists say climate change is likely making them more intense and frequent, and Bangladesh is already rated by the United Nations as one of the countries most affected by extreme weather events since the turn of the century.

Most worrying for authorities was the predicted storm surge of up to three metres (10 feet) above normal tide levels, which could inundate areas home to millions of people.

About 33,000 Rohingya refugees from Myanmar, controversially relocated to a storm-prone island in the Bay of Bengal, were advised to remain indoors.

The newly-formed silt island of Bhashan Char, where Bangladesh has been relocating Rohingya refugees to alleviate overcrowding in their refugee camps, was expected to be hit by heavy rains and strong winds.

"The Bhashan Char shelters are protected by a 19-feet-high embankment. Still, we asked people to stay at home," a senior security officer told AFP from the island.

The government had hoped to evacuate about 2.5 million other people ahead of the storm, the country's disaster management minister Enamur Rahman told reporters earlier Monday.

"The evacuation has already begun from the morning," the minister said, adding that more than 7,000 shelters have been readied in an effort to keep casualties to a minimum.

At least 250,000 people had already been evacuated from coastal districts to cyclone shelters by the afternoon, two regional administrators told AFP.

Tens of thousands of volunteers were mobilised for the effort, said a spokesman for the local chapter of the Bangladesh Red Crescent Society.

"We have already evacuated the most vulnerable people, especially those who live in remote islands and river banks and those who live in flimsy houses," Aminul Ahsan, regional administrator of Barisal, told AFP.

"In some places we have used force to bring people to cyclone shelters. It is for their own safety," another regional administrator said.

In the neighbouring eastern Indian state of West Bengal, several thousand people were also being evacuated as a precaution, with more than 100 relief centres opened, officials said.

"A special squad is making a round-the-clock vigil along the coastline of the state," West Bengal government minister Arup Biswas said.

"Fishermen have been asked not to venture into the sea. Ferry services have also been suspended," he said.

In 2020, Cyclone Amphan, only the second "super cyclone" ever recorded over the Bay of Bengal, killed more than 100 people in Bangladesh and India, and affected millions.

Last year, more than a million people were evacuated along India's east coast before Cyclone Yaas battered the area with winds gusting up to 155 kilometres an hour -- equivalent to a Category 2 hurricane.

The 1970 Bhola cyclone, one of the world's worst natural disasters, killed several hundred thousand people in Bangladesh -- then known as East Pakistan -- and India.

In recent years, better forecasting and more effective evacuation planning have dramatically reduced the death toll from such storms.