Until recently the most sinister part of that tradition, the procurement of underage girls, was well-known but rarely discussed. 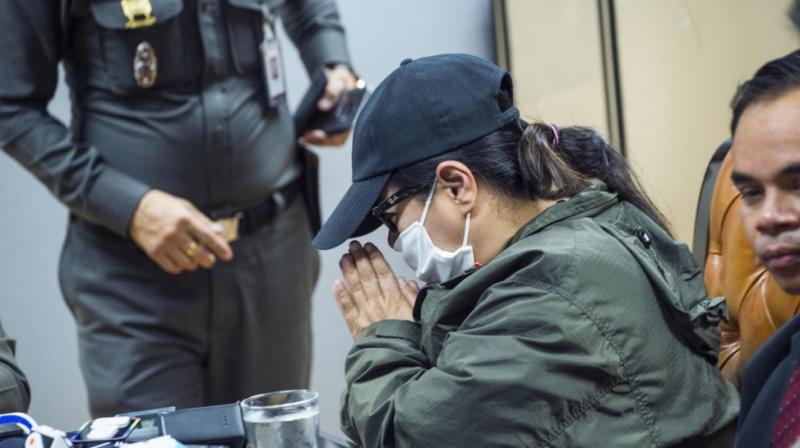 The mother of a victim of a sex-trafficking ring greeting a high-ranking police official. (Photo: AFP)

Bangkok: When senior bureaucrats visited the remote Thai province where local official Boonyarit worked, the routine was often the same welcome them with the finest food and drink and then bring out the teen girls, often referred to as "dessert".

The tradition known by the euphemistic Thai phrase "treat to food, lay down the mat" refers to the expectation that underlings lavish superiors and VIPs with local delicacies, top-notch accommodation and sex services.

Until recently the most sinister part of that tradition, the procurement of underage girls, was well-known but rarely discussed.

Yet a trafficking scandal involving teens, police and officials in Boonyarit's province has flung the practice onto the nation's front pages, prompting calls to root out a culture that helps fuel the kingdom's infamous flesh trade.

While Thailand is known globally for flashy red-light districts that cater to foreigners, the bulk of its sprawling sex industry is geared mostly towards locals.

"This tradition became common a long time ago," explained Boonyarit Nipavanit, a district official in Mae Hong Son, a poor and rugged province in the mountainous north.

"When groups of senior officials come for seminars or work trips, there is a custom of 'treating them', which means welcoming them with food, and then 'laying down the mat,' which means providing girls," he said.

"Sometimes we received information about what type of girls they liked... sometimes officials had to prepare five to ten women for a senior to chose from."

Boonyarit is comfortable speaking freely about the practice now that detectives have opened 41 cases into an alleged police-run prostitution network in his province.

The probe was launched after the mother of a victim fled to Bangkok and told the media that her then 17-year-old daughter and other teens were blackmailed into sex work and forced to entertain officials and cops.

Some of the victims, she said, were branded with owl tattoos by the gangmasters as a kind of ownership stamp.

Under pressure from the press, national police arrested a Mae Hong Son police sergeant accused of trafficking girls into the sex ring and charged eight other officers with sleeping with the minors.

Five administrators from central Nonthaburi province have also been charged for allegedly hiring the teens with government funds during an official visit to Mae Hong Son.

"Since this story broke, many officials feel relieved that we don't have to do it anymore," said Boonyarit. But the so-called tradition is far from unique to Mae Hong Son.

Trafficking experts say it is widespread in a hierarchial country where subordinates both in government and the private sector are expected to pamper bosses to hold onto jobs or move up the career ladder.

"We don't have a merit system in the bureaucracy, we have to bribe our bosses," explained Lakkana Punwichai, a Thai columnist covering social issues.

The practise of arranging sex for superiors comes from "a culture that sees girls not as human beings but as property", she added.

"She is a present. She is the same as food, as beautiful clothes -- something that has a price."

Many sex trafficking victims are too fearful to come forward when it is powerful figures who control or patronise the business especially in rural areas like Mae Hong Son, where social networks are small. Local authorities are also under pressure to protect their own.

That was the case in Mae Hong Son, where police initially tried to bury the accusations made by the whistleblowing mother, who has requested anonymity and is now under government protection in Bangkok. "She was asked to compromise the case by some (local) police," her lawyer said.

In the wake of the Mae Hong Son scandal, Thailand's Social Development Ministry said it would "lead by example" as an agency "opposed to the 'treat to food, lay down the mat' practice". Anti-trafficking police also vowed to accelerate a crackdown on the flesh trade.

Last week a task force arrested three local officials from northeastern Nakhon Ratchasima province accused of having sex with teen girls some as young as 14 who were trafficked into an underage prostitution ring. But experts say it is almost always only low-level pimps or officials who are punished.

"After police rescue the girls and handlers, they never expand the case," said Ronnasit Proeksayajiva from anti-trafficking NGO Nvader. "They never investigate more about who the customers are."