Nearly 2,000 rescuers, including soldiers, frantically scoured through the mud and rocks to find survivors. 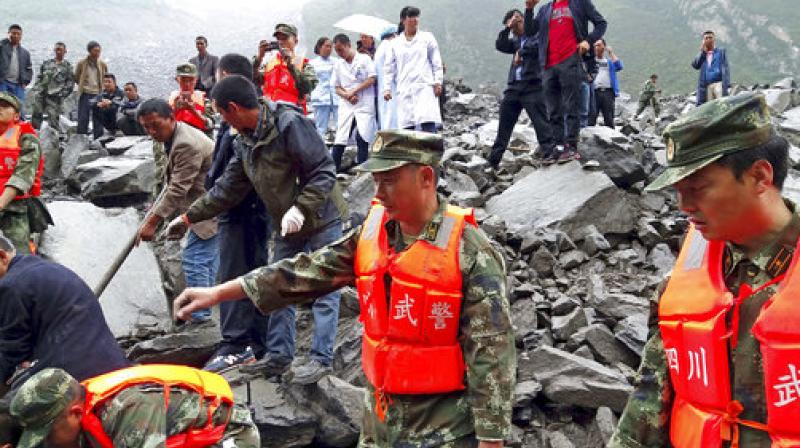 Emergency personnel and local people work at the site of a landslide in Xinmo village in Maoxian County in southwestern China's Sichuan Province. Dozens of people are feared buried by a landslide that unleashed huge rocks and a mass of earth that crashed into their homes, a county government said. (Photo: AP)

Beijing: At least 15 people were killed and over 120 others remained missing after a mountain village was on Saturday buried under tonnes of rocks following a massive landslide in southwest China's Sichuan Province, the worst such disaster in the country in recent times.

The early morning landslide, which came from a mountain in Tibetan and Qiang Autonomous Prefecture of Aba, engulfed 62 homes and a hotel in Xinmo Village in Maoxian County.

A side of a mountain collapsed following the landslide, blocking a 2 km section of a river and burying 1,600 metres of road.

The Maoxian government said on its Weibo social media account that 15 bodies were pulled from the rubble while 120 people remained missing.

State media had earlier reported that 141 people may have been buried but later the figure was revised.

The landslide was apparently triggered by a mild earthquake in the area, an expert told state-run CGTN.

According to reports, the village which was built in a valley surrounded by mountains experienced one more landslide after the initial one in the morning.

Nearly 2,000 rescuers, including soldiers, frantically scoured through the mud and rocks to find survivors.

Armed police and experts in geology, hydrology and surveillance joined the rescue and risks assessment group with equipment including drones and laser scanners.

It is the biggest landslide in this area since the Wenchuan earthquake that killed 87,000 people in 2008 in a town in Sichuan.

A family of three was pulled out alive from the rubble, the Mao County government said on its official Weibo page.

The couple and their baby are being treated at the Mao County People's Hospital, the post said.

Chinese President Xi Jinping and Premier Li Keqiang have ordered all-out efforts to save people buried in the landslide.

Xi has ordered the State Council, China's Cabinet, to send a work team to the site.

The prime minister has ordered an investigation into the reason for the landslide.

The provincial government has launched the highest level of disaster relief response and sent rescue teams to the site.

"In the entire village I could only see one home. The rest had been totally buried by rocks," said a local official Li Yuanjun.

Reports from the area said some people stuck under the mud and rock used mobile phones to call emergency lines.

"A woman shouted and dozens of troopers heard her and asked her questions. She could only use a stone to tap in response," Wang Yongbo, a firefighter, told TV channels.

Roads in the county were closed to all traffic except emergency services.

Local authorities have been asked to take extra precautions in rain-affected areas.

China's national weather observatory continued a yellow alert for rain today, with more heavy showers expected across the country in the next few days.

Landslides are a regular danger in mountainous regions of China, especially during heavy rains.