Hijacker had issues with wife, wanted to talk to PM Sheikh Hasina: Officials

With the plane close to Chittagong, the passenger stood up from his seat and tried to go to the cockpit, according to aviation officials. 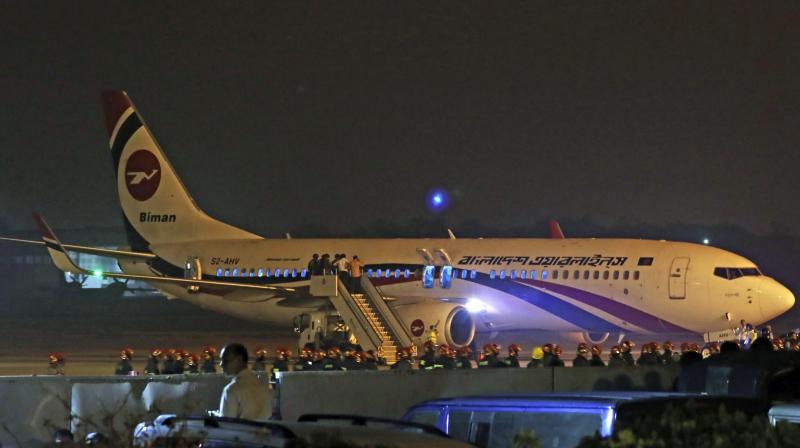 Bangladeshi commandoes shot a passenger on Sunday who had tried to enter the cockpit of a Biman Bangladesh Airlines flight. (Photo:AP)

Dhaka: Bangladeshi commandoes shot a passenger on Sunday who had tried to enter the cockpit of a Biman Bangladesh Airlines flight after waving a gun and threatening to blow up the plane, airline and aviation authority officials said.

The passenger, who had said he had a personal issue with his wife and told the pilot he wanted to speak to Bangladesh's Prime Minister Sheikh Hasina, died later from the injuries suffered after the commandos stormed the plane at Chittagong's Shah Amanat International Airport, officials said.

"We tried to arrest him or get him to surrender but he refused and then we shot him," said Major General S M Motiur Rahman of the Bangladesh Army.

The man's threat to blow up the plane, which was on its way to Dubai from Dhaka via Chittagong, led its pilots to make an emergency landing.

Before the commandos moved in, all 142 passengers and most of the crew had been let off the aircraft unharmed. One crew member had been held hostage, the officials said.

Air Vice Marshal Nayeem Hasan, chairman of the Civil Aviation Authority of Bangladesh, told reporters at a news conference that as well as holding what appeared to be a pistol the passenger said he had explosives bound to his body.

With the plane close to Chittagong after leaving Dhaka, the passenger stood up from his seat and tried to go to the cockpit, according to aviation officials. When a member of the crew blocked his way, he showed his pistol.

He then said he had explosives and if they didn't open the door of the cockpit he would blow up the plane, officials said. Other members of the crew alerted the pilots to the problem and they asked air traffic control for an emergency landing.

The security questions are a matter of concern and would be the subject of an investigation, said the aviation official.

The man appeared to be in his 20s, and was probably Bangladeshi as he was speaking Bangla, but his identity was not yet clear, Hasan said.