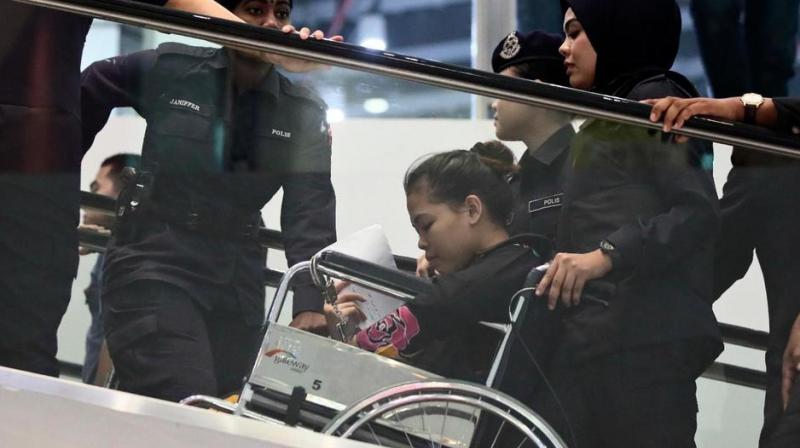 The judge followed the path Kim walked to the airport clinic, seeking help after being attacked, and retraced the movement of the two women, who were seen on security footage rushing to restrooms afterward to wash their hands. (Photo: AP)

Sepang: The two women accused of killing the North Korean leader's half brother toured the Malaysian airport today as participants in their murder trial visited the scene of the attack.

The judge, prosecutors, defence lawyers and representatives of the women's home countries were escorted inside the Kuala Lumpur airport by heavily armed police on a visit meant to give the trial participants a better perspective of events as they unfolded.

Indonesian Siti Aisyah and Doan Thi Huong of Vietnam appeared subdued as the group moved around. The women, who have pleaded not guilty, were handcuffed and wearing bulletproof vests as they have often since their arrests.

The judge followed the path Kim walked to the airport clinic, seeking help after being attacked, and retraced the movement of the two women, who were seen on security footage rushing to restrooms afterward to wash their hands.

Huong and Aisyah are the only two suspects detained in the brazen assassination of Kim, an outcast from North Korea's ruling family who lived abroad in virtual exile for years.

Their defence lawyers have said the women were duped by suspected North Korean agents into believing they were playing a harmless prank for a TV show.

Kim Jong Nam was not thought to be seeking influence over his younger brother but had spoken out publicly against his family's dynastic rule.

Since the trial opened October 2, witnesses have testified that Kim died from acute VX poisoning and that the banned chemical agent was found on his face and clothing and on the women's clothing and on Huong's fingernail clippings.