Ahead of his Pak-India visits, secretary of state meets President Ghani to discuss new US Afghan policy. 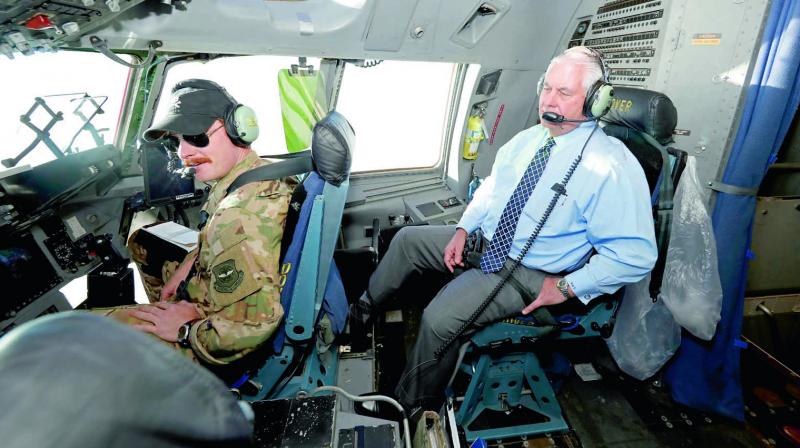 Secretary of state Rex Tillerson talks with the pilots as he sits in the cockpit of C-17 aircraft on Monday on the way to Bagram Air Base, Afghanistan. (Photo: AP)

Mr Tillerson reiterated the US commitment to working with the Kabul government and regional partners “to achieve peace in Afghanistan and deny safe havens to terrorists who threaten that goal”, said a US embassy statement posted on Twitter.

The meeting took place at Bagram Airfield, America’s largest base in Afghanistan, as the resurgent Taliban step up attacks on Afghan police and troops in response to the US strategy announced in August.

“Clearly we have to continue to fight against the Taliban, against others, in order for them to understand they will never win a military victory,” Tillerson told reporters after the meeting that was also attended by Afghan Chief Executive Abdullah Abdullah.

It was Tillerson’s first trip to Afghanistan as secretary of state and comes several weeks after US defence secretary Jim Mattis also paid an unannounced visit.

The closed-door talks covered Ghani’s reform programme, his anti-corruption strategy and preparations for parliamentary elections due to take place next year.

US President Donald Trump “has declared that we are here to stay until we can secure a process of reconciliation and peace”, Tillerson said, adding: “It’s not an unlimited commitment.”

Mr Tillerson’s unannounced visit follows one of the bloodiest weeks in Afghanistan in recent memory.