Nawaz Sharif will hold important meetings in Jeddah before heading back to Pakistan in a couple of days. 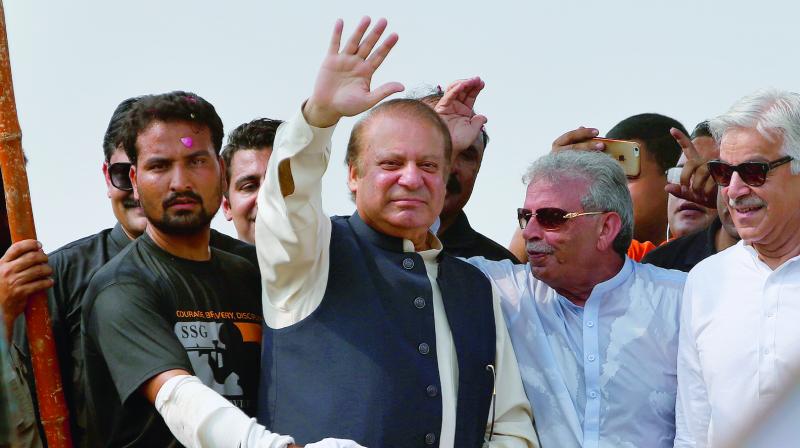 Nawaz Sharif on Monday left London for Saudi Arabia to perform Umrah (mini-pilgrimage). The ousted PM, who left for London earlier this month to see his ailing wife, was scheduled to arrive in Lahore on Tuesday (today).

Nawaz Sharif will hold important meetings in Jeddah before heading back to Pakistan in a couple of days.

Mr Sharif is due to appear before an Islamabad-based accountability court on October 26 along with his daughter Maryam Nawaz and son-in-law Mohammed Safdar in connection with corruption references filed by the National Accountability Bureau (NAB) on the instructions of the Supreme Court.

On October 26, the top graft-buster will produce witnesses against the accused in the Avenfield Flats and Flagship Investment Limited references, and the ones concerning Al-Azizia Company Limited and Hill Metals Establishment.

In its July 28 verdict in the Panamagate case, the apex court had directed the NAB to prepare and file four references against the Sharifs and finance minister Ishaq Dar on the material collected and referred to by the Joint Investigation Team (JIT) in its report pertaining to Panama Papers.

Meanwhile on Monday, National Accountability Bureau chairman Javed Iqbal ordered to freeze Mr Dar’s assets, and the report has on Monday (today) been submitted in the accountability court during the hearing of the graft reference against Mr Dar.

The reference was filed by NAB following the Supreme Court’s July 28 orders in the Panama Papers case. Ishaq Dar reached the accountability court of Judge Mohammad Bashir at the Judicial Complex in Islamabad for his seventh appearance today. Heavy contingents of police have been deployed outside the NAB court for security purpose.

It has been sktated in the NAB report that all moveable as well as immoveable assets of the finance minister have been frozen. Furthermore, two prosecution witnesses, private banks’ officers Abdur Rehman Gondal and Masood Ghani, have appeared in the court.

The statement of Abdur Rehman Gondal has been recorded by the court in which he said he appeared before NAB on August 17 with all documents that it asked for.

He told the court that a Current Account was opened on Ishaq Dar’s name on March 25, 2005 and he has handed over 12-year bank statement of Mr Dar’s account to NAB.

Meranwhile, the Dan reported on Monday the NAB ordered an inquiry into the corruption allegations levelled against Mr Sharif’s Shahbaz Sharif in the Multan Metro Bus Project, and  the controversial selling of a flight-worthy Pakistan International Airlines' (PIA) aircraft.