Committed to 'war on terror': Pak PM Abbasi to Tillerson

During a short part of the meet available to media, Tillerson told the Pak delegation, the nuclear-armed nation was an important US ally. 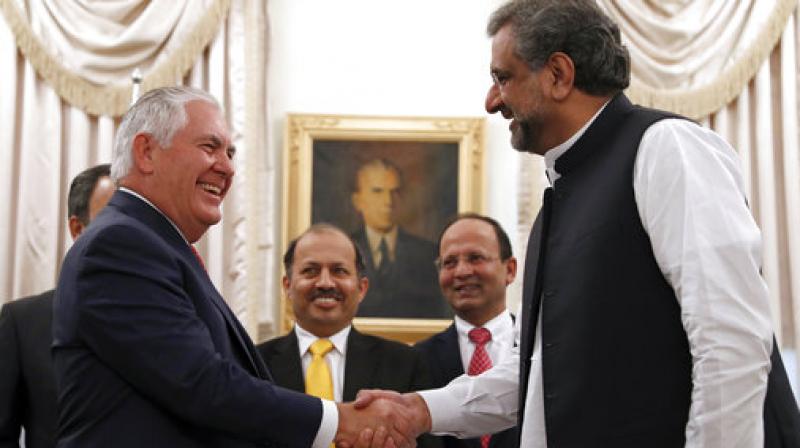 US Secretary of State Rex Tillerson shakes hands with Pak PM Shahid Khaqan Abbasi, before their meeting at the Prime Minister's residence on Tuesday in Islamabad. (Photo: AP)

Islamabad: Pakistan Prime Minister Shahid Khaqan Abbasi on Tuesday told US Secretary of State Rex Tillerson that Pakistan was committed to the “war on terror.”

In a meeting with US Secretary of State in Islamabad, Abbasi said Pakistan had “produced results” fighting the militants in the region.

Pak-US relations have frayed in recent years, with Washington accusing Islamabad of turning a blind eye or helping Afghan Taliban and Haqqani network militants who stage attacks in Afghanistan. Pakistan denies doing so.

President Donald Trump has vowed to get tough with Pakistan unless it changed its behaviour, with US officials threatening further reductions in aid and mooting targeted sanctions against Pakistani officials.

Tillerson, on a tour of Asia and the Middle East, arrived in Pakistan on Tuesday afternoon and met with Abbasi, as well as Pakistan’s powerful army chief, General Qamar Javed Bajwa.

“We are committed in the war against terror,” Abbasi told Tillerson, as the two men sat facing each other.

“We have produced results. And we are looking forward to moving ahead with the US and building a tremendous relationship,” added Abbasi, who sat next to General Bajwa.

During a short part of the meeting available to media, Tillerson told the Pakistani delegation that the nuclear-armed nation was an important US ally in the region.

“(Pakistan is) important regionally to our joint goals of providing peace and security to the region and providing opportunity for greater economic relationship as well,” Tillerson said.

As well as support for the Afghan Taliban and the Haqqani network, another sticking point in the relationship has been growing closeness by the United States to India, Pakistan’s arch-foe and neighbour.

But this deepening in ties has alarmed Pakistan, which has rejected a greater political role for India and for Afghanistan as a “red line” for Islamabad.

Earlier on the arrival of the US Secretary of State, Minister for Foreign Affairs Khawaja Muhammad Asif welcomed him.