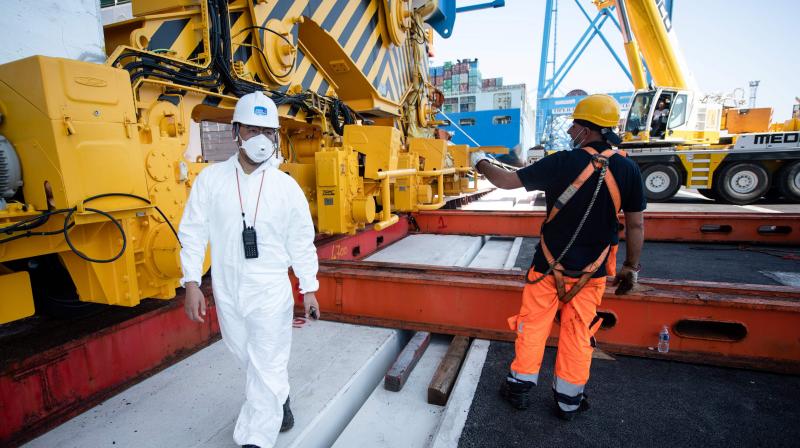 A quarantine order was imposed on six different vessels anchored in the city's waters after some of the crew members tested positive for the virus. (AFP)

Hong Kong: Hong Kong's sudden spike in coronavirus cases may have stemmed from its willingness to let seafarers skip quarantine while changing ships in the city, a leading health expert said.

After its previous success tackling the disease and ending local transmission, case numbers in the densely packed finance hub increased this month, sparking fears of a new outbreak spreading out of control.

The city reported 123 new infections Friday, a new daily record, bringing the total tally to 2,372 with 16 deaths. Most of the new cases were locally transmitted.

Some health experts have blamed an exemption from the usual 14-day quarantine which the government granted to "essential personnel" including cross-boundary truckers, aircrew and sea crew.

But officials have said the arrangement was necessary, while insisting it was a "misunderstanding" that the new wave was attributable to the exemption.

After analysing virus samples from recent confirmed cases, Gabriel Leung, dean of the University of Hong Kong's medical school, said on Thursday the virus' resurgence most likely stemmed from such imported cases.

He said the wave was "probably because of the multiple imported (cases), it could be the crew members or sailors exempted from quarantine".

"When they entered Hong Kong, there were no immediate quarantine measures or testing arrangements. You could imagine, some of the crew members, the hotel they stay in maybe is downtown," he said.

Hong Kong has one of the world's busiest container terminals.

Leung added that, with the previous relaxation of social distancing measures in June, small restaurants had become high-risk venues, especially those frequented by taxi drivers.

As confirmed cases suddenly surged earlier this month, the government ordered mandatory virus tests for arriving crew members, as well as forcing shipping agents to arrange isolated accommodation and point-to-point transfers to and from the vessel for crew members.

A quarantine order was imposed on six different vessels anchored in the city's waters after some of the crew members tested positive for the virus.

The other crew members, about 140 in total, were being quarantined on board as authorities said the ships needed to be manned.

More than 1,000 infections were confirmed in the last fortnight alone, more than 40 percent of the total since the virus first hit the city in late January.