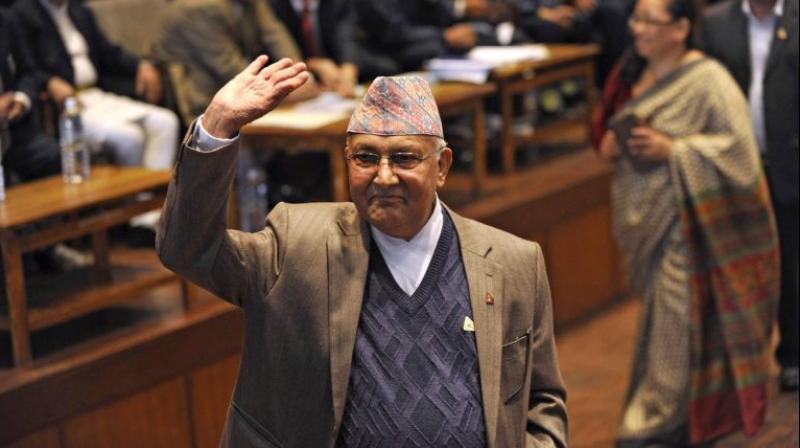 The prime minister said the agreement signed by Nepal and China for the assistance to railway connectivity is an important document of his visit. (Photo: PTI)

Kathmandu: Prime Minister K P Sharma Oli on Sunday said his visit to China has further enhanced the friendship and bilateral cooperation between the two countries in wide-ranging areas including cross-border rail and road connectivity.

Speaking to journalists upon his arrival at Tribhuvan International Airport in Kathmandu after a five-day visit to China, Oli said the agreements on railways, energy, transportation, infrastructure development, tourism, among others, have prepared the outline for long-term economic assistance, the Kathmandu Post reported. The prime minister said the agreement signed by Nepal and China for the assistance to railway connectivity is an important document of his visit.

Oli had held talks with Chinese President Xi Jinping and Premier Li Keqiang, following which a Memorandum of Understanding (MoU) was signed to build a strategic railway link connecting Tibet with Kathmandu through the arduous Himalayan terrain. The new railway line will connect the Gyirong trading port in the city of Xigaze in Tibet with the Nepali capital Kathmandu. Oli expressed hope that cross-border railway projects will give an impetus to cross-border connectivity between Nepal and China.

This is the second significant initiative by Oli, after he signed a transit trade treaty with China during his brief previous tenure in 2016 to reduce dependence on India for transportation of goods to Nepal.      The details of the railway agreement have not been made public.

Oli said he had visited the "northern neighbour to ensure collaboration with neighbours and to make the 'Prosperous Nepal, Happy Nepalis' campaign successful."

He said his visit to China has further enhanced the friendship and political relations between the two countries. Oli said he invited Chinese President Xi Jinping for a visit to Nepal.

China has been building rail, road and air links in the remote Tibet spending billions of dollars. A railway line was put in operation in 2014, linking Tibet's provincial capital Lhasa with Xigaze. Xigaze which is also known Shegatse, is the closest Tibetan city to Nepal.

Earlier, there were reports in the Chinese official media that the railway line was to be extended till India.

Meanwhile, former foreign minister Prakash Saran Mahat has said that Nepal should ask both India and China to build railway links to the country on grants instead of investing national budget in such projects. A key leader of the main opposition Nepali Congress (NC), Mahat claimed that Nepal cannot pay back the loan if such a loan is taken for constructing railways in the country as the cost of such projects would exceed the annual capital expenditure of Nepal.

“We should urge both China and India to build railways in Nepal under their grant assistance. We can't pay the loan back if we start constructing railway on our own it would need a huge investment and it would take decades or even a century to get returns from such mega projects,” Mahat was quoted as saying by My Republica.