Pak army in response to firing, releases video of damage of Indian posts

Pak army spokesman Major General Asif Ghafoor in a statement with the video alleged that India on May 13 had targeted innocent civilians. 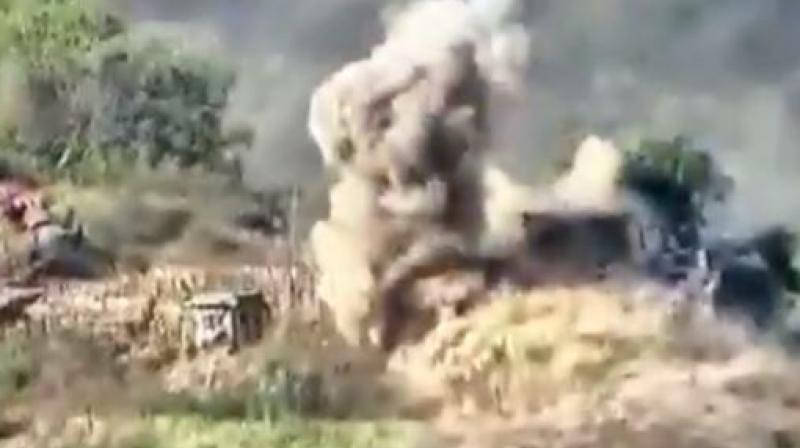 The 22-second video released by the Indian Army showed concrete structures being reduced to rubble amid plumes of smoke and balls of fire. (Photo: Videograb)

Islamabad: The Pakistan army has released a video purportedly showing heavy damage caused to the Indian military posts across the Line of Control, in a tit-for-tat action after the Indian Army released a clip of the "punitive fire assaults" on Pakistani positions.

Pakistan army spokesman Major General Asif Ghafoor in a brief statement with the video, posted on the army's Facebook page, alleged that India on May 13 had targeted innocent civilians.

The Pakistan army's footage was released in an apparent reaction to the Indian Army releasing a video of the military action which showed some structures in a forested area being destroyed.

The Indian Army yesterday said it launched "punitive fire assaults" on Pakistani positions across the LoC, inflicting "some damage", days after two of its troopers were beheaded.

The Pakistan army, however, dismissed as "false", the Indian Army's assertion of destroying its posts in the Naushera sector. Sources in the Indian Army said the strike was a message to Pakistan that it will take stronger action with increased frequency against any infiltration attempts from across the border.

The 22-second video released by the Indian Army showed concrete structures being reduced to rubble amid plumes of smoke and balls of fire.