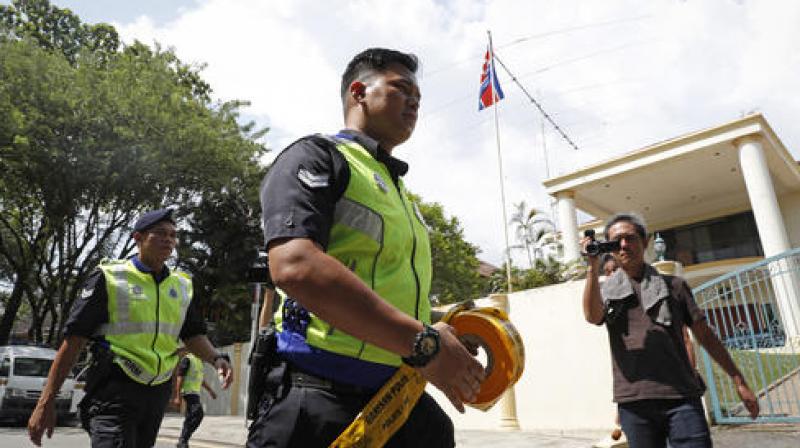 Police cordon off an area outside the North Korean embassy in Kuala Lumpur. (Photo: AP)

Kuala Lumpur: The banned chemical weapon VX nerve agent was used in the murder of Kim Jong Nam, the North Korean ruler's outcast half brother who was poisoned last week at the airport in Kuala Lumpur, police said on Friday.

The substance was detected on Kim's eyes and face, Malaysia's inspector general of police said in a written statement, citing a preliminary analysis from the country's Chemistry Department.

The death of Kim Jong Nam, whose daylight assassination in a crowded airport terminal seems straight out of a spy novel, has unleashed a diplomatic crisis that escalates by the day. With each new twist in the case, international speculation grows that Pyongyang dispatched a hit squad to Malaysia to kill the exiled older sibling of North Korean leader Kim Jong Un.

North Korea has denounced Malaysia's investigation as full of "holes and contradictions" and accused the authorities here of being in cahoots with Pyongyang's enemies.

According to Malaysian investigators, two women - one of them Indonesian, the other Vietnamese - coated their hands with chemicals and wiped them on Kim's face on Feb. 13 as he waited for a flight home to Macau, where he lived with his family.

He sought help from airport staff but he fell into convulsions and died on the way to the hospital within two hours of the attack, police said.

The case has perplexed toxicologists, who question how the two women could have walked away unscathed after handling a powerful poison, even if - as Malaysian police say - the women were instructed to wash their hands right after the attack.

Dr. Bruce Goldberger, a leading toxicologist who heads the forensic medicine division at the University of Florida, said even a tiny amount of this nerve agent - equal to a few grains of salt - is capable of killing. It can be administered through the skin, and there is an antidote that can be administered by injection. U.S. medics and military personnel carried kits with them on the battlefield during the Iraq war in case they were exposed to the chemical weapon.

"It's a very toxic nerve agent. Very, very toxic," he said. "I'm intrigued that these two alleged assassins suffered no ill effect from exposure to VX. It is possible that both of these women were given the antidote."

He said symptoms from VX would generally occur within seconds or minutes and could last for hours starting with confusion, possible drowsiness, headache, nausea, vomiting, runny nose and watery eyes. Prior to death, there would likely be convulsions, seizures, loss of consciousness and paralysis.

The case has marked a serious turnaround in relations between Malaysia and North Korea. While Malaysia isn't one of Pyongyang's key diplomatic partners, it is one of the few places in the world where North Koreans can travel without a visa. As a result, for years, it's been a quiet destination for Northerners looking for jobs, schools and business deals.