Park's features are transposed onto a nude Asian woman who clasps a missile from Terminal High Altitude Area Defence system to her bosom. 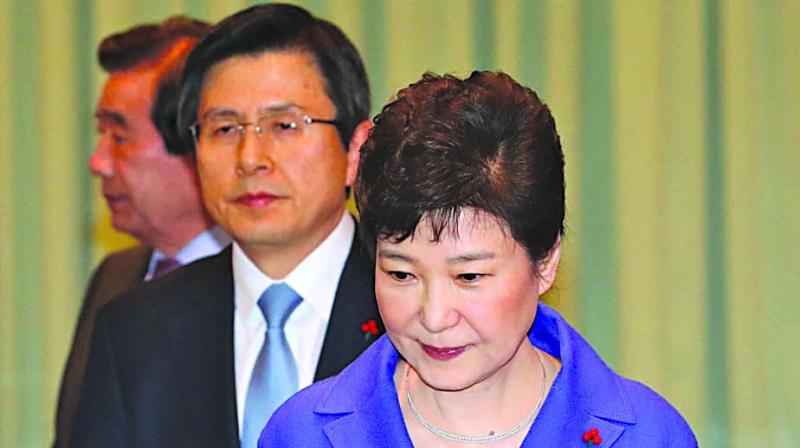 Seoul: A nude painting of impeached South Korean president Park Geun-Hye met a violent end at the country's parliament on Tuesday, reports said, as supporters tore the work which evokes Edouard Manet's Olympia off the wall and destroyed it.

The image was part of an exhibition at the National Assembly featuring works by 22 artists lampooning Park and her confidante Choi Soon-Sil, who is at the centre of the corruption scandal that led to Park's impeachment.

In Manet's 19th-century original, on display in the Musee d'Orsay in Paris, a naked white woman widely identified as a prostitute stares boldly out at the viewer while a black servant brings her flowers.

In Lee Koo-Young's version, entitled "Dirty Sleep", Park's features are transposed onto a nude Asian woman who clasps a missile from the Terminal High Altitude Area Defence system to her bosom.

Park last year agreed with the US government to deploy the system in South Korea in response to the threat of missiles from the nuclear-armed North, infuriating China.

She is also depicted dozing as the Sewol ferry which went down with the loss of nearly 400 lives three years ago sinks outside her window.

Two puppies cavort on her thighs and Choi takes the place of the servant.

A group of some 20 Park supporters went on a rampage at the exhibition, South Korea's Yonhap news agency reported, wrecking the work. A 63-year-old member of a rightist group was arrested and another was being sought by police, it said.

On its website the Musee d'Orsay describes Manet's painting as a "profanation of the idealised nude", adding that it "provoked a violent reaction".

Pyo Chang-won, the opposition lawmaker who organised the exhibition, has been referred to an ethics panel by his own Democratic Party over the picture, which provoked accusations of sexism and bad taste. However, he defended the painting.

"It surely does not suit my taste," Yonhap quoted him as saying. "But I believe it is within the boundary of the freedom of arts."

Painter Lee is one of nearly 10,000 artists on a "blacklist" drawn up by the conservative government for voicing criticism of Park. Those named are said to have been deprived of government subsidies and private investment, as well as being placed under state surveillance.