The Philippines is pummelled by 20 major storms each year on average, many of them deadly. 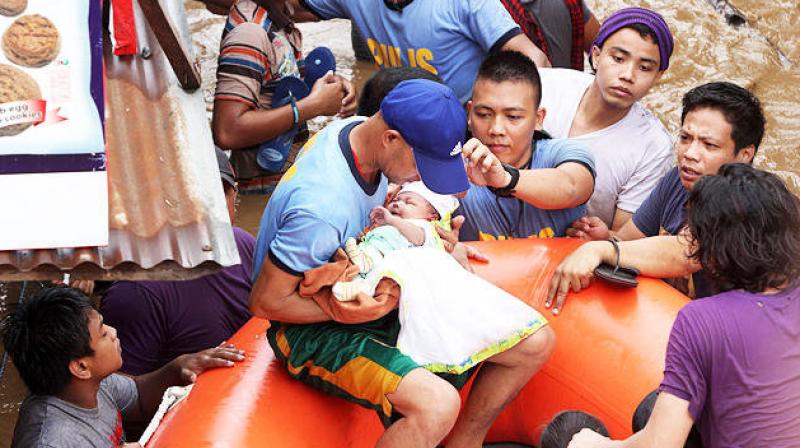 Nineteen deaths were reported near the town of Tubod on Friday on Mindanao, the archipelago nation's second-largest island, where Tropical Storm Tembin unleashed flash floods and mudslides erased a remote village from the map, police said. (Photo: AFP)

Manila: The death toll from a tropical storm that struck the southern Philippines has risen to 30 as massive mudslides wiped out a mountain village, officials said Saturday.

Nineteen deaths were reported near the town of Tubod on Friday on Mindanao, the archipelago nation's second-largest island, where Tropical Storm Tembin unleashed flash floods and mudslides erased a remote village from the map, police said.

"The river rose and most of the homes were swept away. The village is no longer there," Tubod police officer Gerry Parami told over a phonecall.

"The houses were toppled by mud and logs and only the stumps of a few concrete homes are left," Parami said.

Police, soldiers and volunteers were digging through the rubble of Dalama, a farming village of about 2,000 people, using shovels in search of more bodies, he added.

Four others were killed in nearby towns and cities, police said, while seven people perished in Lanao del Sur province according to civil defence officials there.

Four people were listed as missing after being buried in landslides or being swept away by floodwaters, while more than 12,000 have fled their homes.

The Philippines is pummelled by 20 major storms each year on average, many of them deadly. But Mindanao, home to 20 million people, is rarely hit by these cyclones.

After slicing across Mindanao on Friday, Tembin spread west over the Sulu Sea with gusts of 95 kilometres an hour.

It was forecast to smash into the tip of the western island of Palawan late Saturday, the state weather service said.

The deadliest typhoon to hit the country was Haiyan, which left 7,350 people dead and destroyed entire towns in heavily populated areas of the central Philippines in November 2013.