Thais to bid Bhumibol farewell amid replica of Vedic universe

Next week hundreds of musicians and dancers will enact King Bhumibol’s favourite episodes of Khon, the royal masked dance of the Ramakien. 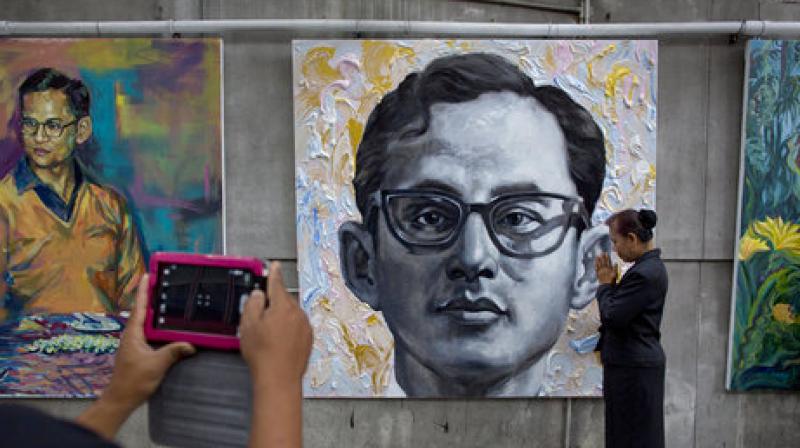 A Thai mourner poses for a photograph while paying tribute in front of a portrait of late Thai King Bhumibol Adulyadej close to the Grand Palace in Bangkok. (Photo: AP)

October 26, 2017, “is the day Thai people dread”, wrote the Bangkok Post last April, when the date of the cremation of the late King Bhumibol Adulyadej was announced. It will be the final farewell of the beloved monarch who will go down in history as having not only one of the longest of reigns — 70 years and seven months — but also one of the most unusual and multifarious. What other sovereign faithfully performed the ancient rites of Asian kingship and took ordination as a Buddhist monk in 1956, was an ardent student of science and agriculture who held numerous patents, created Thai fonts for the first generation of personal computers, built his own sailboat and with it won a gold medal in 1967 South Asian Games, was an accomplished painter, photographer and composer whose jam sessions with Stan Getz and Benny Goodman earned him the popular sobriquet “The Jazz King”

When King Bhumibol passed away on October 13, 2016, Thailand entered an official year of mourning according to traditional observances for deceased Siamese monarchs. Preparations at once began for the royal cremation ceremonies, which will take place from October 25 to 29, 2017. The fine arts department of the office of traditional art has deployed hundreds of artisans who have worked non-stop to create a grand pavilion adjacent to the Grand Palace, representing the apotheosis of Thailand’s bounteous cultural heritage. There are 132 sculptures of Hindu and Buddhist deities, and a central image of Narayana with the visage of King Bhumibol, representing an avatar of the primordial form of Lord Vishnu, the preserver. Hundred craftsmen spent eight months carving the king’s sandalwood coffin, along with 24 Garudas and 64 Apsaras, which will bear the king’s soul to the pinnacle of Mount Meru — Khao Phra Sumeru in Thai — when his body is placed upon the funeral pyre.

The cosmological order of the Kingdom of Siam descends from ancient India, thus the cremation site is a replica of the Vedic universe, and funeral rites will be performed by brahmin priests. The Ramayan took root in Siamese culture as the Ramakien, integrated with the teachings of the Buddha. King Bhumibol, a devout Buddhist, was Rama IX of the Chakri dynasty, the symbolic personification of Ram, the seventh avatar of Lord Vishnu. In 1345, King Lithai of the Sukhothai Phra Ruang dynasty, wrote the Traibhumikatha, “the three worlds of existence”, based on the Vedic scriptures, wherein the cosmos is divided into three realms: arupa-loka, the formless realm; rupa-loka, the corporeal realm and kama-loka, the realm of sensation, where the worlds of the devas, mankind and the underworld coexist. The universal axis is Mount Meru, the abode of supreme deities, which rises from the forests of Himavanta — Himmapan in Thai — mystical habitat of the Naga, Kinaree, Singha and Garuda, the myriad creatures of Indian legend who populate the urban landscape of modern Thailand, on bank notes, official emblems and hotel logos. King Bhumibol was one of the supreme avatars of the best of globalisation; born in Cambridge, US, when his father Prince Mahidol was the first Thai to earn a degree from Harvard Medical School, raised in Switzerland, where he studied science, law and Dixieland jazz, the late king brilliantly synthesised East and West, and 21st century Thailand is a melange of antiquity and modernity, fused by the delicate piquancy of Siamese culture.

Next week hundreds of musicians and dancers will enact King Bhumibol’s favourite episodes of Khon, the royal masked dance of the Ramakien. Orchestras will play King Bhumibol’s jazz and classical compositions. Actors will perform of the Legend of Mahajanaka, a Jataka tale of one of Lord Buddha’s past lives as a prince who showed great perseverance in his quest to regain the Kingdom of Mithila, which King Bhumibol rewrote for modern Thais readers, and became a best-selling book and an animated film.

Eighty-five replicas of the royal crematorium have been erected across Thailand, and the ceremonies will be shown live on television, but thousands of Thai citizens are travelling to Bangkok to be a part of the ceremonies. “I booked a room at a hotel near the Grand Palace as soon the date for the cremation was announced,” said a businesswoman from northern Chiang Mai. “All the hotels have been fully booked for months. I know it will be crowded and it’s been raining heavily in Bangkok, but I don’t want to watch the funeral on television, I want to feel close to my king. It’s like saying goodbye to a father.”

“Next week we shouldn’t just mourn the loss of our king, we should celebrate his life,” said a retired professor who flew from London to Bangkok for the king’s funeral. “I remember when he came to the throne after the Japanese occupation of World War II. Thailand was desperately poor: there were no roads, no schools and no electricity in the villages. King Bhumibol went to every corner of Thailand, he listened to his people, he thought about what they needed and he built this country for us. I know sometimes it’s hard to explain why we love our king so much, but if you think of how far he took this country, how hard he worked, maybe you can understand how special he was.”