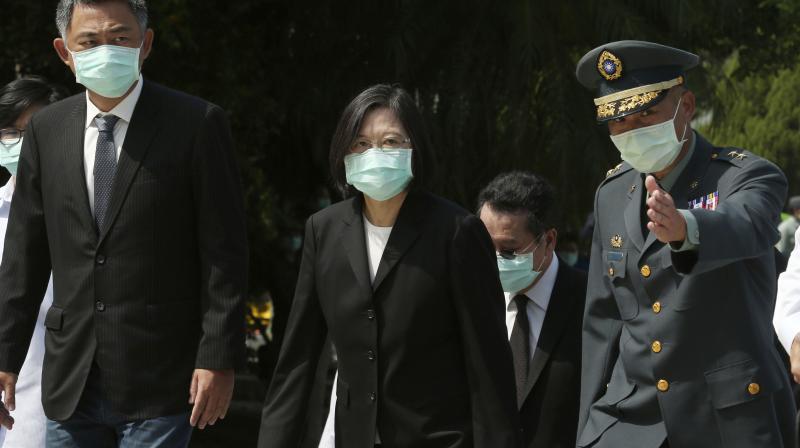 Kinmen: The U.S. envoy to Taiwan joined President Tsai Ing-wen at a military memorial service Sunday in a fresh show of warming relations that threatened to add to irritants in Washington's relations with Beijing.

Neither the director of the American Institute in Taiwan, William Brent Christensen, nor Tsai spoke at the annual event for soldiers killed by Chinese bombing in 1958 on Kinmen, a Taiwanese-controlled island near the mainland coast. Attendees, wearing masks as a precaution against the coronavirus, observed one minute of silence. Military personnel lit incense at soldiers' graves.

Washington has no official relations with Taiwan, which split with the communist-ruled mainland in 1949 following a civil war. The Trump administration has made gestures toward Taiwan as relations with Beijing soured. This month, Health and Human Services Secretary Alex Azar became the highest-ranking U.S. official to visit, prompting a Chinese protest.

Despite that lack of official ties, the United States is Taiwan's most important ally and weapons supplier. The AIT is a non-profit corporation instead of an embassy but is staffed by State Department employees.

There was no immediate official Chinese comment Sunday about U.S. participation in the memorial.

Sunday marked the first appearance by an AIT director at the annual memorial. Christensen has previously attended events with Tsai, but Sunday's was unusually high-profile. Some Taiwan TV channels broadcast the memorial live.

Christensen, who brought an eight-member delegation, and Tsai said nothing to reporters.

Previous Taiwanese presidents have spoken at the memorial. Tsai, who took office in 2016, made no speech last year but talked to reporters about events in Hong Kong.

Washington's support for Taiwan's democratically elected government has been a chronic irritant in relations with Beijing. More recently, the two sides are at odds over Beijing's technology ambitions, spying accusations, trade, the South China Sea and China's response to the virus pandemic.

The soldiers commemorated Sunday were killed after the mainland's People's Liberation Army began artillery attacks on Kinmen, which lies near the Chinese coast, on Aug. 23, 1958.

Their intensity declined the following October but they didn't end until Washington and Beijing formed official relations in 1979.