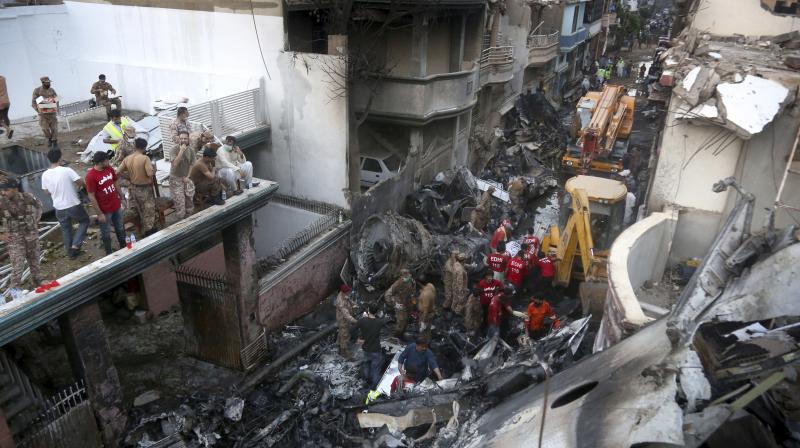 Volunteers and soldiers look for survivors of a plane crash in a residential area of Karachi, Pakistan, May 22, 2020. (AP)

Karachi: A day after a Pakistan Airlines passenger plane crashed into a Karachi neighbourhood, authorities said there were two survivors and 97 victims in the disaster. The bodies of the passengers and crew killed were recovered from the site near the city's airport, the Sindh Health Ministry said.

The rescue operation following Friday's crash ended in the early hours of Saturday.

Survivors told horrific tales of bodies landing on their cars. Raja Amjad was out for an afternoon drive when he was blindsided by a body that landed on his car.

As Amjad jumped from his vehicle, he looked overhead to see another passenger still alive and dangling from the plane's emergency exit, calling for help.

"He was alive. He was speaking. He asked me to save him. I tried to pull him out, but his legs were badly stuck in the emergency door," Amjad told AFP, saying he called the emergency services.

The aircraft's wings sliced through roofs as the fuselage smashed into pieces, while the fire from the crash spread to nearby homes close to the bustling port city's airport.

Rescue workers arrived immediately and along with residents began combing through the debris looking for survivors as firefighters tried to extinguish the flames fed by the Airbus A320's jet fuel.

"I heard a blast. Immediately I ran outside. There were clouds of smoke. There was fire. The fire erupted on the roof of a house," said resident Najeeb Ur Rehman.

The alleyway at the centre of the crash was littered with debris from pieces of the plane's cabin along with personal goods from luggage, which were scattered across vehicles and motorbikes parked in front of homes.

Sarfraz Ahmed, a firefighter at the crash site, said several bodies still had their seatbelts fastened while others were wearing oxygen masks, according to another rescue official at the scene.

After spending hours working in the scorching heat, rescuers and security forces paused briefly for a few minutes to break their Ramadan fasts as they sipped water and nibbled on fruit at dusk while the call to prayer blared before heading back to the crash site.

As night fell over the neighbourhood, cranes hoisted lights over the scene allowing rescue teams to continue combing through the wreckage.

The crash comes as Pakistanis across the country are preparing to celebrate the end of Ramadan and the beginning of Eid al-Fitr -- a time when families gather and feast for days after a month of fasting.

"This Eid had already become meaningless because of coronavirus, but now it has become a tragedy for all of us, not only the relatives of the victims," said Mudassar Ahmed, whose home was just blocks from the crash site.

Friday was a public holiday in Pakistan kickstarting a mass migration of people travelling back to their homes in cities and villages for Eid, with many slated to see extended family for the first time in months following the lockdown over the coronavirus pandemic.

Commercial flights had resumed just a few days ago, after planes were grounded during a lockdown.