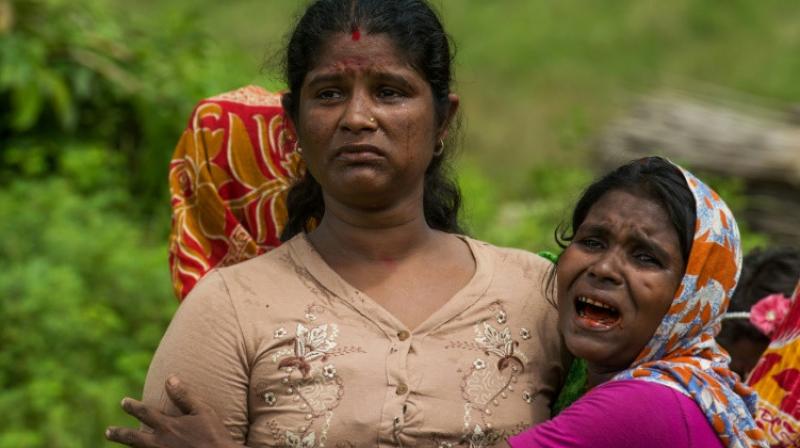 The killings took place on August 25, 2017, the report said, the same day that the Rohingya insurgents staged coordinated deadly raids on police posts that tipped the state into crisis. (Photo: AFP)

Yangon: Rohingya militants massacred Hindu villagers during last year’s uprising in Myanmar’s Rakhine, Amnesty International said on Wednesday in a report that sheds fresh light on the complex ethnic rivalries in the state.

The killings took place on August 25, 2017, the report said, the same day that the Rohingya insurgents staged coordinated deadly raids on police posts that tipped the state into crisis.

Myanmar’s military responded to the insurgent raids with harsh reprisals that forced some 700,000 Rohingya Muslims out of the mainly Buddhist country where they have faced persecution for years.

The UN says the army crackdown amounted to “ethnic cleansing” of the Rohingya, with soldiers and vigilante mobs accused of killing civilians and burning down villages.

But the Rohingya militants have also been accused of abuses.

Those include the mass killing of Hindus in the far north of Rakhine, where the military took reporters -- including news agency AFP -- to witness the exhumation of putrid bodies from a grave in September.

The militants, known as the Arakan Rohingya Salvation Army (ARSA), denied responsibility at the time.

But Amnesty International said on Wednesday that a new investigation had confirmed the group killed 53 Hindus “execution-style” -- mostly children -- in the Kha Maung Seik village cluster in northern Maungdaw.

“Accountability for these atrocities is every bit as crucial as it is for the crimes against humanity carried out by Myanmar’s security forces in northern Rakhine state,” she added.

Citing interviews with eight survivors, the rights group said dozens were rounded up, blindfolded and marched out of town by masked men and Rohingya villagers in plain clothes.

“They slaughtered the men. We were told not to look at them... They had knives. They also had some spades and iron rods,” 18-year-old Raj Kumari told Amnesty.

He said he hid in the bush and watched as his father, brother and uncle were killed.

The report said that in a separate village nearby called Ye Bauk Kyar, 46 Hindu men, women and children disappeared on the same day. It cited information from local Hindus who believe they were killed by ARSA.

While Rakhine was home mainly to Buddhists and Muslims before the crisis, it also boasts a small but longstanding Hindu minority -- many of whom were brought in by British colonisers looking for cheap labour -- as well as several other smaller ethnic groups.

Myanmar has faced a flood of international condemnation for the its persecution of the Rohingya, who are stateless and have been targeted by bouts of communal violence.

The government denies any widespread abuses and has accused rights groups of a pro-Rohingya bias, while highlighting the suffering of other ethnic groups swept up in the violence.

“It is important that the international pressure on Myanmar won’t favour ARSA’s actions,” government spokesman Zaw Htay told AFP when asked about the Amnesty report.

But David Mathieson, an independent analyst, said the report should strengthen the argument for Myanmar to allow independent investigations into the crisis.

Authorities have severely restricted media access to the conflict zone and barred UN investigators from entering the country.

“Failing to grant access to humanitarian aid workers and researchers and journalists will continue the official culture of denial, which has zero credibility in the eyes of the world,” he told AFP.