Peace on border a must for ties, India tells China

Mr Wang, 64, succeeds his senior colleague Yang Jiechi who has now become a politburo member of the Communist Party of China’s (CPC). 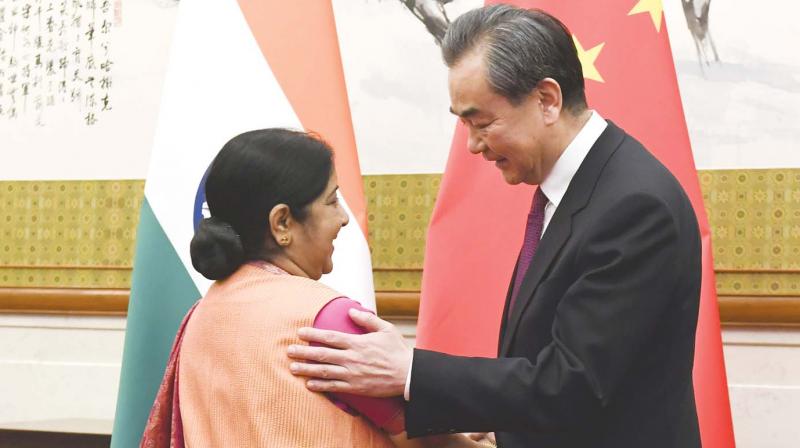 Foreign minister Sushma Swaraj with her Chinese counterpart Wang Yi prior to a meeting in Beijing. (Photo: AP)

Beijing: India on Sunday said maintaining peace in the border areas with China was an “essential pre-requisite” for the smooth development of bilateral ties as external affairs minister Sushma Swaraj held crucial talks with her Chinese counterpart Wang Yi to reset the relations after the Doklam standoff.

Ms Swaraj and Mr Wang also exchanged views on cooperation on multilateral arena and discussed their perspectives on counter-terrorism and collaborative efforts to address other global challenges, such as climate change and sustainable development.

Ms Swaraj arrived here on Saturday on a four-day visit to take part in the foreign ministers’ meeting of the Shanghai Cooperation Organisation (SCO) from Monday.

She was received by Mr Wang at the Diaoyutai state guest house in Beijing ahead of their bilateral meeting.

This was their first meeting after Mr Wang was elevated as state councillor last month which makes him the top diplomat of the country in the Chinese hierarchy. He also continues to be the foreign minister.

Mr Wang, 64, succeeds his senior colleague Yang Jiechi who has now become a politburo member of the Communist Party of China’s (CPC).

During the meeting, Mr Wang announced that Prime Minister Narendra Modi and Chinese President Xi Jinping will hold an informal summit from April 27-28 in the Chinese city of Wuhan.

In her initial remarks, Ms Swaraj congratulated Mr Wang on being elevated as state councillor and appointed the special representative for the India-China boundary talks.

“This shows how much trust your leadership has in your abilities. I think your new responsibilities will improve India-China relations,” she said.

“We will work closely with the Chinese leadership to take India-China cooperation to new heights,” she said before the meeting.

“While making efforts to progress our relations in diverse areas, we underlined that maintaining peace and tranquillity in the India-China border areas is an essential pre-requisite for the smooth development of bilateral ties,” she said in a press statement with Mr Wang after the meeting.

Following the Dokalam standoff last year, both countries increased dialogue to scale down tensions and improve relations with talks at various levels.

Ms Swaraj said the two sides agreed that as two major countries and large emerging economies, healthy development of India-China relations was important for the emergence of the Asian Century.

“We believe that commonalties outweigh our differences and that we must build on our convergences, while seeking mutually acceptable resolution to our differences,” she said.

Ms Swaraj said as part of the preparatory discussions for the Modi-Xi summit, she and Mr Wang noted with satisfaction the progress made in ties since their last meeting in December in New Delhi.

“The (Modi-Xi) meeting in Wuhan flows from the understanding reached by the two leaders last year that India-China ties are a factor for stability in a period of global changes and have a common responsibility for peace, security and prosperity in the world,” she said.

Ms Swaraj said during her meeting with Mr Wang, they discussed the importance of strengthening people-to-people contact in bringing the two nations closer to each other.

She also conveyed India’s appreciation to the Chinese side for their confirmation on resumption of data sharing on Brahmaputra and Sutlej rivers in 2018. She expressed happiness that the Kailash Mansarovar Yatra through the Nathu La route will be resumed this year.