The Chinese Foreign Ministry said the Belt and Road Initiative is purely an economic project with peaceful intent. 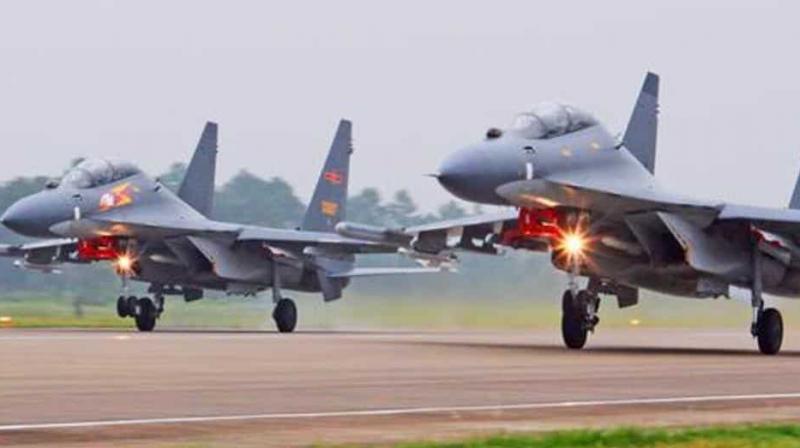 'According to our information the relevant report is not true,' Chinese Foreign Ministry spokesperson Hua Chunying told a media briefing when asked about the report. (Representational Image | AP)

Beijing: China on Friday dismissed as untrue a US media report that alleged that it has hatched a secret plan to build fighter jets and other military hardware in Pakistan as part of the USD 60 billion China-Pakistan Economic Corridor (CPEC) project.

The Islamabad datelined report in the New York Times said Pakistani Air Force and Chinese officials were putting the final touches to the secret proposal.

"Chinese officials have repeatedly said the Belt and Road is purely an economic project with peaceful intent. But with its plan for Pakistan, China is for the first time explicitly tying a Belt and Road proposal to its military ambitions - and confirming the concerns of a host of nations who suspect the infrastructure initiative is really about helping China project armed might," the report said.

"According to our information the relevant report is not true," the Chinese Foreign Ministry spokesperson, Hua Chunying, told a media briefing when asked about the report, which coincided with the eighth Joint Coordination Committee (JCC) meeting of the CPEC during which both sides signed an agreement to expand industrial cooperation in diverse fields and attract investment in special economic zones.

Hua said the CPEC is an important framework for cooperation bearing the long-term interests in mind.

All-weather friends and close allies, China and Pakistan have been jointly building the J-17 Thunder, a single seater multi-role combat aircraft. Pakistan has been eyeing a number of new advanced Chinese jets including the stealth fighter.