Nine suicide bombers carried out a series of devastating blasts on April 21, 2019, killing nearly 270 people, and injuring over 500 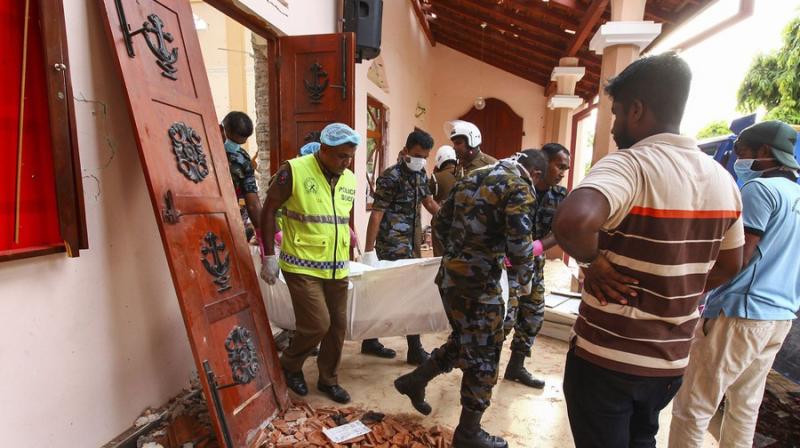 In this April 21, 2019, photo, Sri Lankans carry a dead body from the bomb-damaged St. Sebastian's Church in Negombo. (Photo: AP)

Colombo: Sri Lanka's former police chief Pujith Jayasundera was on Monday charged with criminal negligence for failing to act despite receiving prior intelligence warnings in the 2019 Easter Sunday terror attack that killed nearly 270 people, including 11 Indians.

A total of 855 charges of criminal negligence were levelled against Jayasundera as the Sri Lankan High Court began trial proceedings in the case, which has over 1,200 witnesses, lawyers said.

Jayasundera was present in the courtroom when the charges were read out against him.

His lawyers insisted that the former Inspector General was not guilty of ignoring prior intelligence.

Former defence secretary Hemasiri Fernando, who was a key member in the defence ministry when the attack took place in April 2019, also faces similar charges.

Jayasundera and Fernando were suspended from service and arrested in connection with the case.

However, they were later released on bail.

Both were accused by the then President Maithripala Sirisena for negligence over alleged inaction to prevent attacks despite the availability of prior intelligence on the attacks.

Police have filed over 23,000 charges against suspects for conspiring, aiding and abetting the attacks.

Nine suicide bombers belonging to local Islamist extremist group National Thawheed Jamaat (NTJ) linked to ISIS carried out a series of devastating blasts that tore through three churches and as many luxury hotels on April 21, 2019, killing nearly 270 people, and injuring over 500.

The attack stirred a political storm as the then government headed by President Sirisena and Prime Minister Ranil Wickremesinghe was blamed for its inability to prevent the attacks despite prior intelligence being made available.

During his tenure, Sirisena formed a presidential panel to probe the attacks.

The special presidential probe found Sirisena himself along with a host of other top defence officials, including Fernando and Jayasundera, guilty of ignoring prior intelligence.

The panel report had recommended criminal action against them.

The Catholic Church in Sri Lanka had repeatedly expressed dissatisfaction over the Easter Sunday terror attack investigations undertaken by the government.

It has demanded action against those named in the report for their negligence to stop the attacks despite having prior intelligence.

On a day when Jayasundera and Fernando had a torrent of charges levelled against them, leading Catholic priest Rev Father Cyril Gamini visited the Criminal Investigation Department to record his statement.

He visited the CID for the third day as he was summoned to appear before them.

Earlier this month, Gamini had filed a fundamental rights application fearing a possible arrest for questioning the involvement of the Sri Lankan state intelligence operatives in the Easter attack.

On Sunday, members of the Catholic community held protests in remembrance of the people who had lost their lives in the attack .

They appealed to the Sri Lankan government to ensure speedy justice and allow trials to be conducted with undue political interference.