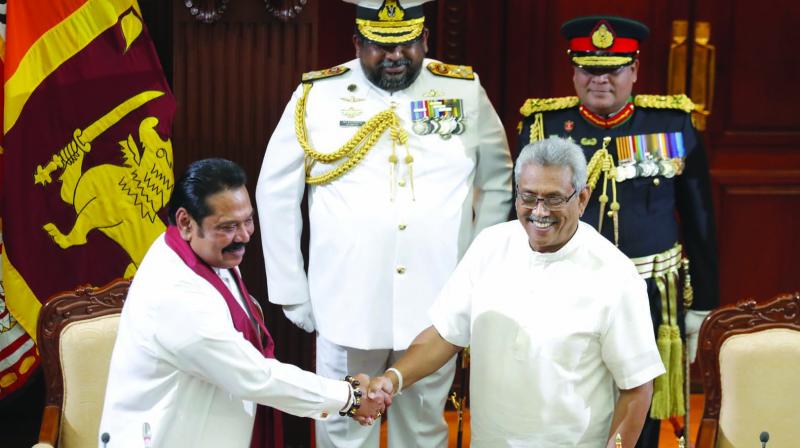 Sri Lanka’s President Gotabaya Rajapaksa (right) greets his brother Mahinda after appointing him as Prime Minister at the presidential secretariat in Colombo on Thursday. (Photo: AP)

Colombo: Sri Lanka’s controversial Rajapaksa clan on Thursday tightened its grip on political power with President Gotabhaya Rajapaksa swearing-in his elder brother Mahinda as the Prime Minister, amidst apprehensions among the minority Tamils and Muslims on the new dispensation’s policies.

Mahinda Rajapaksa assumed duty in his new capacity on Thursday itself. The 74-year-old leader will function as the Prime Minister of the caretaker Cabinet until the general election in August 2020.

Mahinda Rajapaksa took the oath as the new Prime Minister at the Presidential Secretariat, three days after Gotabhaya Rajapaksa was sworn in as the president. Former Prime Minister Ranil Wickremesinghe, former President Maithripala Sirisena and other political leaders were present on the occasion.

This is Mahinda Rajapaksa’s second innings as the Prime Minister. He was Premier for a brief period in 2018 amidst a major political turmoil in the country.

Soon after he was sworn in as the President on Monday, Mr Gotabhaya Rajapaksa thanked the powerful Buddhist clergy for backing his presidential bid and vowed to protect all communities, while giving foremost priority to Buddhism. He also thanked the Sinhala-majority people for electing him.

“I knew I would win the presidency with support coming only from the Sinhala majority. I told the minorities to join me. I did not receive their support. But I will make sure that I will be President for everyone,” he said.

There are already concerns in the country that Gotabhaya Rajapaksa’s remarks may have led to apprehensions among the minority communities, who are already worried about the possibility of the return of an iron-fist rule under the Rajapaksa-duo’s regime.

Mahinda Rajapaksa’s attempt to win an unprecedented third term — after changing the Constitution to allow such a bid — had failed previously.

Mahinda Rajapaksa, who describes himself as “a rebel with a cause”, earlier served as the country’s President from 2005-2015, a period which was mired by allegations of human rights abuses, especially against the Tamils.

Mahinda was appointed the Prime Minister on October 26, 2018 by the then President Sirisena, who sacked Wickremesinghe in a controversial move that plunged the country into an unprecedented constitutional crisis.

He resigned on December 15 as two crucial Supreme Court decisions made the former strongman’s efforts to cling to premiership untenable.

The apex court later unanimously declared that the dissolution of Parliament by President Sirisena was “illegal”.

Mahinda Rajapaksa, a lawyer-turned politician became the country’s youngest ever parliamentarian in 1970 at the age of 24.

However, the brother-duo were accused of condoning sexual violence and extrajudicial killings allegedly by Lankan security forces during the civil war, which ended in May 2009 with the death of LTTE supremo Velupillai Prabhakaran.

In New Delhi, the ministry of external affairs on Thursday said it was ready to work very closely with the new government in Sri Lanka and expressed hope that it will fulfil aspirations of the minority Tamil community living in the country.