Cardinal Malcolm Ranjith said all Easter masses in the Colombo district had been cancelled. 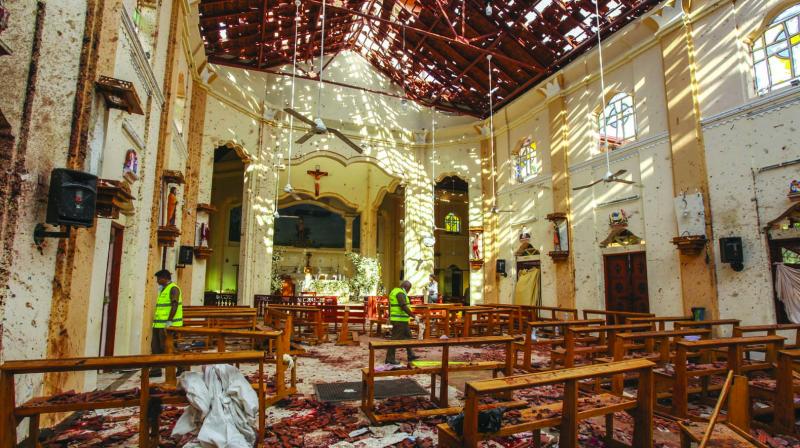 A view of St. Sebastian’s Church damaged in blast in Negombo, north of Colombo on Sunday. (Photo: AP)

Colombo: A string of eight devastating blasts, including suicide attacks, struck churches and luxury hotels frequented by foreigners in Sri Lanka on Easter Sunday, killing 215 people, including three Indians, and shattering a decade of peace in the island nation since the end of the brutal civil war with the LTTE.

The blasts — one of the deadliest attacks in the country’s history — targeted St. Anthony’s Church in Colombo, St. Sebastian’s Church in the western coastal town of Negombo and Zion Church in the eastern town of Batticaloa around 8.45 am as Easter Sunday mass were in progress, police spokesman Ruwan Gunasekera said.

Explosions were reported from three five-star hotels — the ShangriLa, the Cinnamon Grand and the Kingsbury in Colombo.

Mr Gunasekera confirmed 207 deaths. However, News 1st channel said that 215 people had died in the blasts.

Sri Lankan Prime Minister Ranil Wickremesinghe announced Sunday evening that eight people had been arrested over the deadly blasts. He said “so far the names that have come up are local”, but investigators would look into whether the attackers had any “overseas links”. He also acknowledged that “information was there” about possible attacks.

“While this goes on we must also look into why adequate precautions were not taken,” he said, but added that the government’s first priority would be to “apprehend the terrorists”.

Chairman of Sri Lanka Tourism Kishu Gomes said 33 foreign nationals were killed in the coordinated attacks believed to be carried out by a single group. National Hospital director Anil Jasinghe identified 12 of the 33 foreign nationals, which include three Indians, two Chinese and one each from Poland, Denmark, Japan, Pakistan, America, Morocco and Bangladesh. US secretary of state Mike Pompeo said in Washington that “several” Americans had been killed in the blasts.

No group has claimed responsibility for Sun-day’s attacks. However, most of the deadly attacks in the past in Sri Lanka were carried out by the Liberation Tigers of Tamil Eelam (LTTE), which ran a military campaign for a separate Tamil homeland in the northern and eastern provinces for nearly 30 years before its collapse in 2009 after the Sri Lankan Army killed its supreme leader Velupillai Prabhakaran.

Briefing reporters, Mr Gunasekera said the police was not able to confirm if these were all suicide attacks. He, however, said that one of the blasts at the Katuwapitiya (Negombo) church has signs of being what looked like a suicide attack.

An unnamed official said a suicide bomber blew himself up at the restaurant of the Cinnamon Grand Hotel.

When a police team entered a house in the Colombo north suburb of Orugodawatta to conduct a search, a suicide bomber blew himself up, causing a concrete floor of a two-storey building to crash on them, killing three policemen in the eighth blast, the police said.

Soon after the eighth blast, the government imposed curfew with immediate effect. The curfew will be in force indefinitely until further notice, officials said.

President Maithripala Sirisena has appealed for calm. “I have been shocked by this totally unexpected incidents. The security forces haven been asked to take all action necessary,” Mr Sirisena said. Prime Minister Ranil Wickremesinghe termed the blasts as “cowardly attacks” and said his government was working to “contain the situation”. He tweeted: “I call upon all Sri Lankans during this tragic time to remain united and strong... The government is taking immediate steps to contain this situation.”

Security has been intensified around the religious places across Colombo. The government has temporarily blocked all social media platforms.

Images circulated on the social media showed severely damaged St. Sebastian’s Church, with a shattered ceiling and blood on the pews.

The riot police and the Special Task Force, extra police security has been deployed around the Bandaranaike International Airport, the state-run Daily News reported.

All state universities were closed until further notice. Cardinal Malcolm Ranjith said all Easter masses in the Colombo district had been cancelled.

Former President Mahinda Rajapaksa, under whose leadership the Sri Lankan Army crushed the LTTE, termed the attack as “barbaric”.