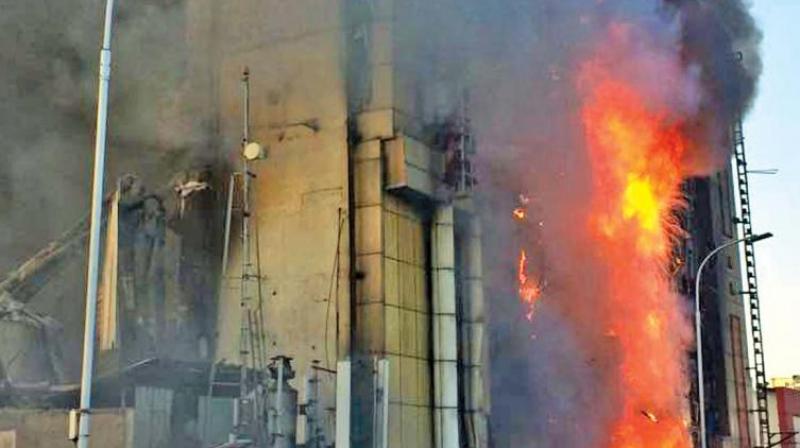 The fire fighter brigade of Jiangsu has mobilised 176 fire trucks with 928 personnel to join the rescue mission, the Ministry of Emergency Management said. (Photo: Representational/ File)

Beijing: The death toll in the powerful explosion at a chemical plant in eastern China climbed to 47 on Friday as a number of people succumbed to their injuries. The blast occurred on Thursday following a fire in a fertilizer factory in a chemical industrial park in Yancheng, Jiangsu province, according to the government of Xiangshui county. Forty Seven people have been killed and a further 90 seriously injured, reported state-run China Daily. The Ministry of Emergency Management said 88 people have been rescued from the site of the incident. Eye-witnesses said several workers were trapped after buildings were knocked down by the shockwave stated to be a mild tremor caused by the blast which took place in a pesticide plant. The blast also shattered windows of nearby residential houses.

The fire fighter brigade of Jiangsu has mobilised 176 fire trucks with 928 personnel to join the rescue mission, the Ministry of Emergency Management said. A professor of applied chemistry at Beijing University of Chemical Technology, in an interview with CCTV, said the leak of toxic chemicals might have affected the people and environment in the surrounding areas. The residents should be evacuated from the place as soon as possible, the profesor said. According to the city's environmental protection authority, the explosion had a negative influence on the air quality in the chemical park and its surrounding areas within a 500-meter radius, but the strong winds are expected to lift the heavy smoke. No residents live in the chemical park, while all people in nearby areas have been evacuated, officials said.

Yancheng's education department said school students were among those injured in the explosion. Online maps of the area indicate that there are at least 10 schools close to the site. Beijing Youth Daily reported that the explosion was caused by benzene and occurred in a production area of the plant. Production at other plants in the area were not affected, the report said. A witness surnamed Xie living about 1.5-km from the plant told Hong Kong-based South China Morning Post that all her windows were shattered by the blast. Jiangsu Tianjiayi Chemical Company, which owns the plant, was established in 2007. Its business includes the manufacture of chemical products such as hydroxybenzoic acid.