The Taliban, which often fights Islamic State’s local affiliate in Afghanistan, issued a statement denying any connection to the blast. 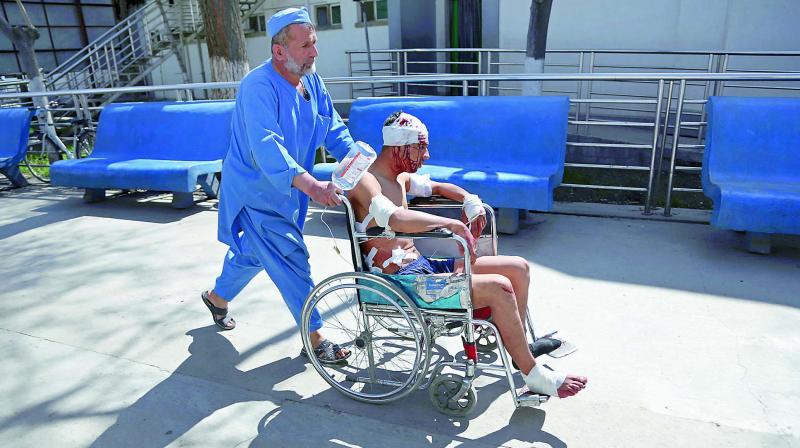 An injured man is moved by wheelchair at hospital after a suicide attack in front of Kabul University in Kabul, Afghanistan. (Photo: AP)

Kabul: A suicide bomber blew himself up near a shrine in Kabul on Wednesday, killing at least 32 people and wounding dozens, as the Afghan capital celebrated the Nawruz holiday marking the start of the Persian new year.

The explosion underlined the threat to the city from militant attacks, despite government promises to tighten security in the wake of an attack in central Kabul that killed around 100 people in January.

The Taliban, which often fights Islamic State’s local affiliate in Afghanistan, issued a statement denying any connection to the blast.

Kabul had been on alert for attacks over the Nawruz holiday but the bomber was still able to detonate his explosives as people were leaving the Kart-e Sakhi shrine, in a heavily Shi’ite area in the west of the city.

“People were heading home joyously after the end of the ceremony when the suicide bomber detonated his explosives among them,” said Kabul police chief Daud Amin. “Many of ourcountry men were martyred.”

Interior ministry spokesman Najib Danesh said the bomber hadapparently intended to reach the shrine, which was attacked during a Shi’ite festival in October 2016, but had been prevented from getting closer by police checkpoints.

“We had our security in place in and around the shrine,” he said. “All the casualties were young people who were eitherpassing by on the road or gathering to enjoy Nawruz.”

Nawruz, an ancient Persian festival to mark the start ofspring, is widely celebrated in many parts of Afghanistan buthas also faced opposition from some fundamentalist Muslims, who say it is un-Islamic.             Waheed Majroh, a spokesman for the ministry of publichealth, said 32 people were confirmed dead with more than 50wounded being treated in hospitals in the city. Women andchildren were among the casualties, he said. Wednesday’s attack was latest in a series to have struck Kabul.