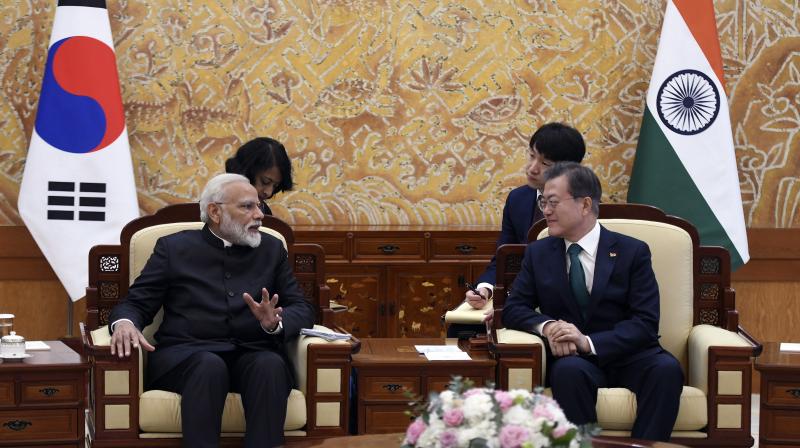 After receiving the award, PM Modi said, "This award does not belong to me personally but to the people of India, the success that India has achieved in the last 5 years, powered by the skill of 1.3 billion people."

PM Modi quoted a portion of the 1988 Olympics Theme Song, as it captures the hopeful spirit for a better tomorrow for all -- 'Hand in hand, we stand, all across the land, we can make this world, a better place in which to live'.

In his speech at the award ceremony, Modi further stated, "I am honoured that this award is being conferred to me in the year that we celebrate the 150th birth anniversary of Mahatma Gandhi."

Modi, who is on a two-day visit to South Korea to strengthen India's strategic ties with the country, was accorded an official reception at the Blue House, the executive office and official residence of the South Korean President here. He also met First lady Kim Jung-sook.

Addressing the media after the "productive talks" with President Moon, Prime Minister Modi said that South Korea is an important partner in India's economic transformation.

Our trade and investment are growing, he said.

"Honouring the heroes. PM @narendramodi laid a wreath at the National Cemetery of the Republic of Korea that entombs remains of 165000 martyrs and paid homage to the fallen soldiers," tweeted MEA Spokesperson Raveesh Kumar.

Immediately after, the Prime Minister reached the Blue House which is the Korean Presidential Office where he received a ceremonial welcome. He is also scheduled to have a meeting with President Moon Jae-in of South Korea, who had visited India in July 2018.

Mayor of Gimhae gifted a Bodhi tree sapling to Prime Minister Narendra Modi as a mark of close ties between India and South Korea.

On Thursday, the Prime Minister unveiled a bust of Mahatma Gandhi at Yonsei Univesity.

Before embarking on a two-day visit, the Prime Minister described South Korea as a valued friend with which India shares special strategic partnership initiatives such as ‘Make in India’, ‘StartUp India’ and ‘Clean India’.

This is the Prime Minister's second visit to the Republic of Korea after his state visit in May 2015.