In a joint statement Modi said, 'I express my gratitude to President Moon for his condolences on the Pulwama attack'. 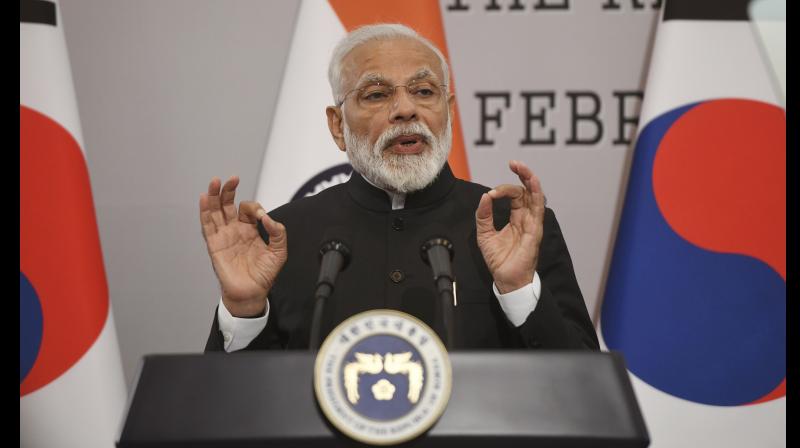 The talks were held at the Blue House, the official residence-cum-office of the South Korean President, where he received given a ceremonial welcome. (Photo: AP)

Seoul: India and South Korea on Friday signed a Memorandum of Understanding (MoU) to help strengthen counter-terrorism cooperation between the two countries, a week after the Pulwama terror attack that left 40 CRPF personnel dead.

The MoU was inked in the presence of Prime Minister Narendra Modi and South Korean President Moon Jae-in after the two sides held delegation-level talks.

"I express my gratitude to President Moon for his condolences on the Pulwama attack and support against terror. The MoU signed between the two countries today will further take forward our counter-terrorism agenda," Modi said after a joint statement was issued by the two countries.

The Prime Minister, who is a two-day visit to South Korea, said to boost bilateral cooperation in defense production, a roadmap has been agreed to by the two sides on defense technology and co-production.

"The defense sector is an important part of our growing partnership with South Korea. An example of this is the induction of K-9 Vajra artillery guns in the Indian Army," he said on the concluding day of his visit.

The first batch of South Korean-made K-9 self-propelled howitzers was delivered to the Army last year. The induction of 100 long-range guns is expected to be completed by November 2020.

Modi said that the combination of India's Act East Policy and South Korea's New Southern Policy is giving a platform to strengthen the special strategic partnership between the two countries.

"India's vision on Indo-Pacific is a special emphasis on ASEAN's centrality and shared prosperity," he said.

Both the leaders held talks on enhancing cooperation in key areas such as trade and investment, defense and security, energy, space, start-ups, and people-to-people exchanges, according to External Affairs Ministry spokesperson Raveesh Kumar.

The talks were held at the Blue House, the official residence-cum-office of the South Korean President, where he received given a ceremonial welcome.

Earlier, the Prime Minister paid tributes to Korean soldiers at the National Cemetery here.
On the Seoul Peace Prize, which will be presented to him later in the day, Modi said he would accept the honor not as a personal achievement, but on the behalf of the people of both India and South Korea as a symbol of goodwill and affection.

The Seoul Peace Prize Cultural Foundation had in October last year announced that Modi will be conferred with the honor in recognition of his dedicated service to international cooperation, global growth, and human development.

Modi had arrived in Seoul on Thursday morning with the aim of strengthening the special strategic partnership between South Korea and India and boosting bilateral trade and cultural ties.

This is the Prime Minister's second visit to South Korea after his state visit in May 2015.