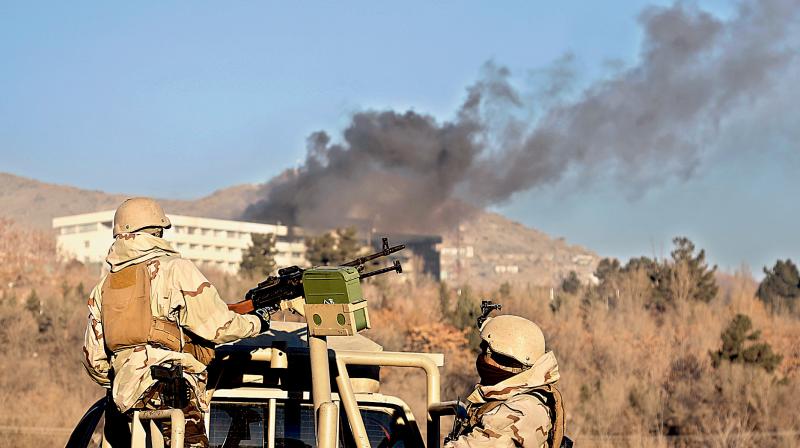 Afghan security personnel stand guard as smoke rises from the Intercontinental Hotel after an attack in Kabul, Afghanistan, on Sunday. Gunmen stormed the hotel in the Afghan capital on Saturday evening, triggering a shootout with security forces, officials said. (Photo: AP)

Kabul: Gunmen stormed a luxury hotel in Kabul and killed at least 18 people, around 14 of them foreigners, sparking a 12-hour battle with Afghan forces backed by Norwegian troops that left terrified guests scrambling to escape.

Several Ukrainians were among those killed in the Taliban-claimed assault on the six-storey Intercontinental Hotel in the Afghan capital, Ukrainian foreign ministry official Vasyl Kyrylych confirmed.

Afghan interior ministry spokesman Najib Danish said 14 foreigners were among the dead, but did not specify their nationalities, in comments to Afghanistan's Tolo News hours after the overnight attack that ended Sunday.

Terrified hotel guests climbed down bedsheets tied to balconies to escape the gunmen rampaging through the hilltop hotel overlooking the Afghan capital.

One lost his grip and fell in Tolo News television footage, which also showed black smoke and flames billowing from the hotel.

Special forces were lowered by helicopters during the night onto the roof of the landmark 1960s building. Afghan security forces killed all six attackers, the interior ministry said.