US troops in Japan banned from drinking post accident

US Marine crashed his vehicle into a mini-truck, killing driver. 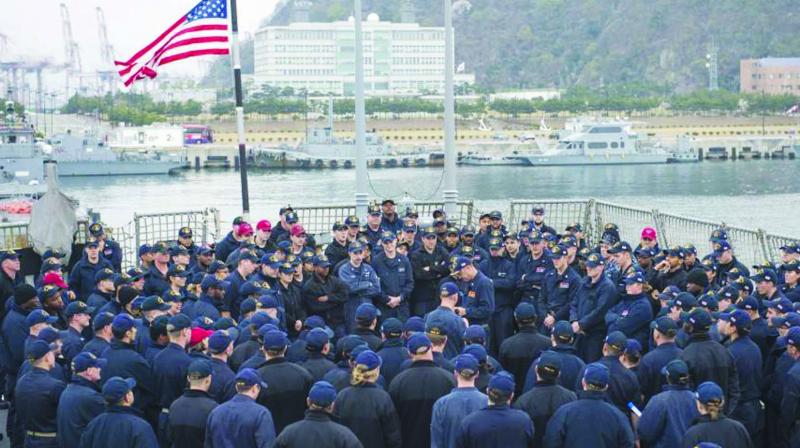 In this file image, an all-hands call is held aboard the guided-missile destroyer USS Benfold at the Okinawa Naval Base in Japan.

Tokyo: US Forces in Japan banned all personnel from consuming alcohol after a drink-driving accident on the island of Okinawa where anti-base sentiment runs high.

A US Marine crashed his vehicle into a mini-truck at an intersection on Sunday, killing the other driver, 61.

The 21-year-old, whose breath test showed an alcohol level three times the legal limit, was arrested and charged with negligent driving resulting in death, police said.

All US servicemen stationed in Japan are now banned from drinking, both on and off base, the US Forces in Japan said in a statement.

In Okinawa, personnel are also restricted to base or to their residences.

“When our service members fail to live up to the high standards we set for them, it damages the bonds between bases and local communities and makes it harder for us to accomplish our mission,” the statement said.

Chief cabinet secretary Yoshihide Suga said Tokyo made an immediate complaint about the case to the US side, demanding the US military enforce strict discipline and take preventive steps. “It is extremely regrettable that this accident happened even though the Japanese government has repeatedly asked them for the thorough implementation of preventive measures and enforcement of disciplines,” Suga told reporters.

The US has several military bases in Japan and stations about 47,000 troops in the country as part of a joint security treaty. But crimes by US personnel have seen relations with locals strained.

In the most recent case, a former US Marine employed at the US Air Force’s sprawling Kadena Air Base on Okinawa was charged with the murder of a 20-year-old woman last year. The incident intensified longstanding local opposition to the American military presence on the island.

Commanders across Japan will immediately lead mandatory training to address responsible alcohol use, risk management and acceptable behavior, the US statement added.

Okinawa accounts for nearly 75% of land allotted for US bases in Japan, despite being only a fraction of the country’s total area.

Commanders say incidents of off-base misconduct have fallen since the introduction of restrictions in 2013 that include requiring individuals of some ranks to be accompanied by a designated companion while spending an evening on the town.

According to Gunnery Sgt. Tiffany Carter, a spokeswoman for US Forces Japan, 2014 saw the lowest level of cases involving US troops since 1972, when Okinawa was handed back to Japan.

No-alcohol bans are routinely in place in active war zones. Nonalcoholic beer was the only tipple available for many troops deployed to Iraq and Afghanistan except for liquor smuggled onto base or obtained from the troops of Nato nations that permitted booze.

Tags: us marine, us troops