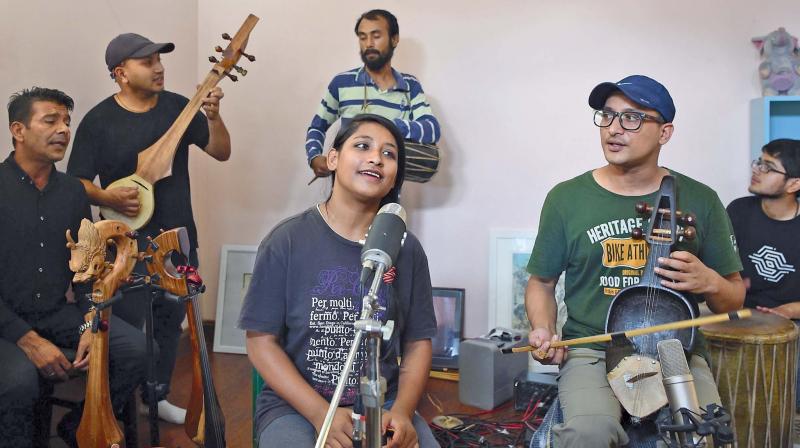 Nepali band “Night” gathers for a rehearsal in Kathmandu. Nepal’s musical heritage is enjoying a revival as young musicians fuse the sounds of traditional instruments once at risk of disappearing with lyrics that examine the modern challenges facing the country. (Photo: AFP)

Kathmandu: Nepal’s musical heritage is enjoying a revival as young musicians fuse the sounds of traditional instruments once at risk of disappearing with lyrics that examine the modern challenges facing the country.

The Himalayan country has a rich folk tradition, but its unusual traditional instruments — which include a leaf from a native tree that is played like a harmonica — were dying out as younger generations moved towards Western music styles. That was until bands such as Night, which formed in 2006 as a metal group, decided to create a modern take on its indigenous music.

“We grew up listening to sounds of guitars and drums and so we started to play the same. But then we started experimenting with folk instruments,” said Night’s Jason Kunwar.

Now the 33-year-old singer’s musical repertoire includes the more esoteric Sarangi, a three-stringed instrument made of wood and dried sheep skin whose sounds are said to closely resemble the human voice, as well as the deeper-sounding Piwancha.

“It is fascinating to discover and learn new instruments. We are fortunate that there are still people who can teach us,” said Kunwar. “The longer we wait, the more likely we are to lose such valuable knowledge.”

The songs tackle some of the most pressing social issues facing the country, including the huge number of Nepalis forced to migrate for work, often not seeing their families for long periods. The combination has proved popular — it was standing room only at the band’s recent gig in Kathmandu.

Ram Prasad Kandel, founder of a folk instrument museum in Kathmandu, believes the country is witnessing a “turning point” in attitudes towards its music traditions.

“There is such diversity in the sound and make of the instruments, and their playing methods. It is a gift from our ancestors,” he told AFP. “It is our identity and the young generation has to continue it.”

Popular rock and pop bands Nepathya and 1974 AD were among the first to produce fusion hits with folk elements. Then Kutumba, an instrumental ensemble formed in 2004, brought the sounds of rural folk instruments to a more hip urban demographic.

They have taken their performances around the world, and are particularly popular with Nepal’s sizeable international diaspora. “They are very excited when we play. Perhaps the music helps them connect to their roots,” said band member Kiran Nepali.

Nepal — a country of 29 million people — is home to around 125 ethnic groups, each with its own music traditions and well as different ways of making instruments.

The songs tell the stories of the country’s culture and history — about sowing seeds and harvesting crops, of husbands and sons migrating for work, of the wounds from the country’s brutal ten-year civil war.

Nepal’s movie industry is also experiencing a revival, with directors moving away from the Bollywood song-and-dance format with storylines about the often harsh reality of life in impoverished Nepal. This has opened up a new market for musicians who produce background scores and soundtracks that weave in a traditional touch.

Kalo Pothi, a 2016 film about the Maoist insurgency that scooped a series of awards at international film festivals, told the story of two boys in a village in western Nepal against a beautiful soundtrack inspired by the sounds of the region.

Pushpa Palanchoki, 24, performs with emerging bands Ma and MiKu, which are also jumping on the trend, fusing contemporary lyrics with traditional sounds.    “Why should we do what everyone is doing when we can create unique music with what is our own,” she said.