The incident took place on Sunday at Christian Wala in Sahiwal district, some 230-km from Lahore. 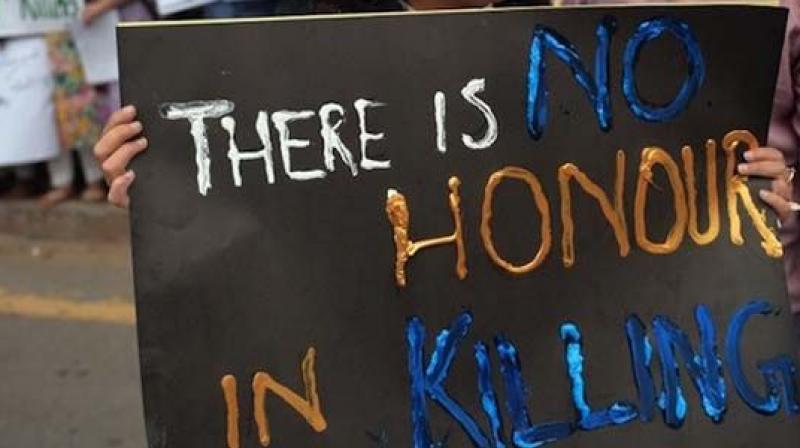 Killing of women relatives in the name of honour is a menace still prevalent in many parts of Pakistan. (Representational Image | AFP)

Lahore: A 19-year-old girl was axed to death allegedly by her stepbrother in the name of honour in Pakistan's Punjab province, a police official said on Monday.

The incident took place on Sunday at Christian Wala in Sahiwal district, some 230-km from Lahore.

According to Station House Officer Rana Tahir, accused Irfan suspected his stepsister Saira had relations with a man of her locality.

Tahir said Irfan on Sunday attacked Saira with an axe while she was asleep and critically injured her.

She was taken to the District Headquarters (DHQ) Hospital Sahiwal where she succumbed to her wounds.

The official said none of the family members reported the matter to the police as they were alerted by a neighbour.

"When the family was bringing Saira's body back to village in an ambulance we intercepted it. Seeing police, Irfan escaped from the ambulance while we took body to the Tehsil Headquarters Hospital for postmortem," Tahir said, adding that raids were made to arrest the suspect.

He said the other family members were not considering it "murder" as Saira had disgraced the family honour.

"We have taken mother of the girl in custody as she was also present when Irfan axed Saira," he said.

Killing of women relatives in the name of honour is a menace still prevalent in many parts of Pakistan. More than 1,000 women are killed every year by their relatives on the pretext of defending what is seen as family honour.