Protesters set up barricades and lit fires before they were dispersed by police firing foam projectiles. 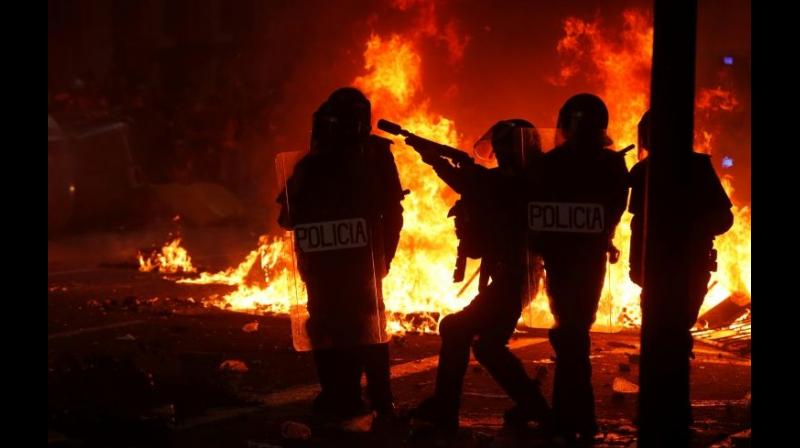 At the Urquinaona square in the city centre dozens of pro-independence activists on Saturday formed a human chain between police and protesters following the previous night's clashes during which nearly 200 people were hurt. (Photo: AFP)

Barcelona: Barcelona returned to relative calm after six days of demonstrations against the jailing of separatist leaders left hundreds injured in the tourist hotspot and pro-independence groups demanding new talks with the Spanish government.

At the Urquinaona square in the city centre dozens of pro-independence activists on Saturday formed a human chain between police and protesters following the previous night's clashes during which nearly 200 people were hurt.

"I reject all forms of violence, I have come here for peace," Carmen Fernandez, 65, told AFP.

But on the famous Las Ramblas, protesters set up barricades and lit fires before they were dispersed by police firing foam projectiles.

Overnight Friday, radical separatists had hurled rocks and fireworks at police who responded with tear gas and rubber bullets.

Regional president Quim Torra Saturday called on the Spanish government to "fix today a day and hour to sit with us for unconditional talks."

His demand for "unconditional" negotiations, addressed to Spanish Prime Minister Pedro Sanchez, appeared to be aimed at ensuring that a referendum on independence, currently a non-starter for Madrid, was up for discussion.

The Spanish government replied that it had "always been open to dialogue in the framework of respect for the law".

It also called on Torra to condemn the violence, "which he has not done so far".

Barcelona has been rocked all week by protests against a Spanish court's jailing of nine separatist leaders on sedition charges over the failed 2017 independence bid.

Emergency services said Saturday that 152 people had been injured in overnight clashes in Barcelona.

Dozens more were hurt elsewhere in Catalonia, taking the total to 182.

The interior ministry said 83 people were detained in the overnight violence, in addition to 128 arrests police had reported previously.

"This can't go on, Barcelona does not deserve this," said Ada Colau, the city's leftist mayor on Saturday, condemning "all kinds of violence".

"All this is very sad, and is not helping our cause," said Assumpcio Segui, a 75-year old pro-independence pensioner.

Torra also urged demonstrators to remain calm. "The defence of rights and freedoms must always be expressed peacefully," he said.

While most marchers appeared peaceful, hordes of young protesters went on the rampage near the police headquarters earlier Saturday, igniting a huge blaze as police fired teargas to disperse them, an AFP correspondent said.

Other fires broke out near Plaza de Catalunya at the top of the tourist hotspot Las Ramblas.

Police vans fanned out around the city, sirens screaming as regional police warned people in a message in English on Twitter "not to approach" the city centre.

On Friday, around half a million people had rallied in Barcelona, the biggest gathering since Monday's court ruling.

Thousands of "freedom marchers" from five regional towns had arrived in Barcelona the same day, which coincided with the general strike in a region that accounts for about a fifth of Spain's economic output.

That action prompted the cancellation of flights and the closure of shops, business and top tourist attractions, including the Sagrada Familia basilica.

With the region mired in chaos, football authorities cancelled the Barcelona and Real Madrid Clasico set for October 26 at the Camp Nou stadium.

Both clubs had reportedly refused an offer to hold the match in Madrid.

Monday's judgment by the Supreme Court has thrust the Catalan dispute to the heart of the political debate as Spain heads towards a fourth election in as many years on November 10.

Conservative Pablo Casado said his Popular Party would be a "dyke against the separatist challenge" while the centre-right Ciudadanos party called Torra a "public danger" who should be dismissed.