There were petitions floating online calling for 'Daw Suu' to be stripped of her Nobel Peace Prize. 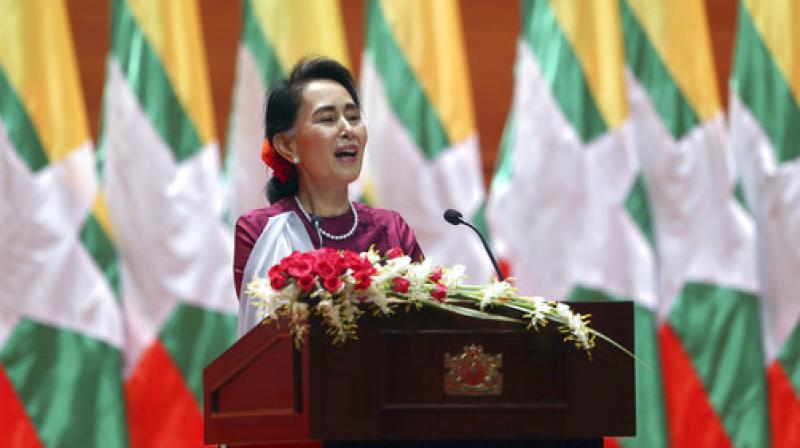 Naypyitaw [Myanmar]: When Myanmar State Councillor Aung San Suu Kyi broke her silence over the Rohingya refugee issue and delivered a State of the Union address at Naypyitaw on Tuesday morning, she refrained from referring to the Muslim minority as 'Rohingyas', inviting the ire of the global community.

There were petitions floating online calling for 'Daw Suu' to be stripped of her Nobel Peace Prize.

In her defence, however, she asserts that she intended to not use 'emotive' terms for an already affected population.

"I think instead of using this emotive term as it is 'highly charged', it is better just to say Muslims. It's just a description that nobody can deny. We are talking about the Muslim community in the Rakhine state, and I do not see any point using terms that inflame passions further," she added.

When asked to make a distinction on whether the Rohingya issue was a humanitarian or a socio-economical crisis, the de-facto leader said, "It is a humanitarian issue, which has risen out of long-term social-economic problems. The problems of the Rakhine state go back to the 19th century. We have to deal with it and resolve it. And obviously, it is not something we can do overnight and it's not something we can find simple answers to, because building up trust and harmony between the two communities that have been hostile to one another is not easy. But there are places in the Rakhine state, where the communities live in a harmonious way and we want to see why it is not possible in some other places."

In her Tuesday's address, the de-facto leader condemned human rights abuses, but did not blame the army or address allegations of ethnic cleansing.

It's also noted that during her speech, Suu Kyi mentioned the Rohingyas by name only once, in reference to the armed militant group - the Arakan Rohingya Salvation Army (Arsa).

Leaders and diplomats from several countries have since expressed strong disappointment with her stance.

More than 4,00,000 Rohingya have fled to Bangladesh since late August.

The latest unrest in the troubled Rakhine state was sparked by attacks on police stations across the state last month, blamed on a newly emerged militant group, the Arsa.

Suu Kyi, in her state address, had stressed on the short time her government has been in power for, adding, "I am aware of the fact the world attention is focussed on the situation in the Rakhine State as a responsible member of the community of nations. Myanmar does not fear international scrutiny and is committed to bring a sustainable solution that will bring peace, stability and development for all communities within that state."

Suu Kyi also defended her country from international criticism and said "more than half" of Rohingya villages were not affected by the violence and invited diplomats and foreign observers to visit them to see "why they are still there when they are surrounded by a state of turmoil" as she addresses the nation on Rakhine issue.