Pfau, who died at the age of 87 on August 10 was known locally as Pakistan's Mother Teresa. 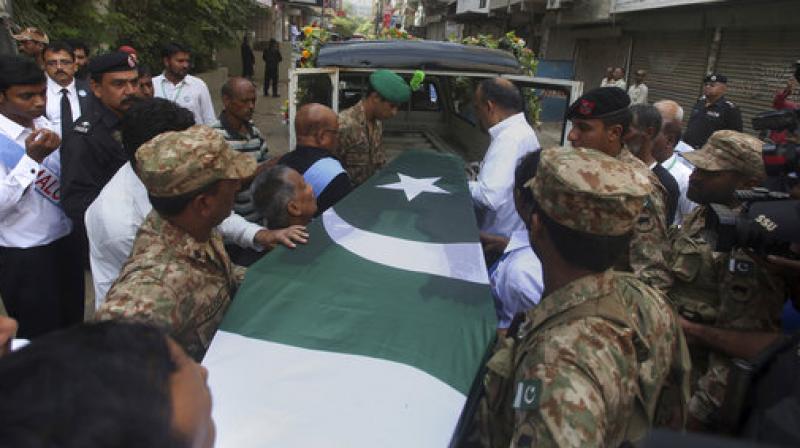 Army troops and others load the casket wrapped in Pakistani flag, of Ruth Pfau, a German physician and nun, into a vehicle to transport it for her funeral in Karachi, Pakistan. (Photo: AP)

Karachi: Ruth Pfau, a German nun who devoted her life to combatting leprosy in Pakistan, was buried with full state honours today, in an unprecedented service for a foreign Christian in the Muslim-majority country.

Pfau, who died at the age of 87 on August 10 was known locally as Pakistan's Mother Teresa. She came to the southern port city of Karachi in 1960 and spent half a century taking care of some of the country's sickest and poorest people.

She was the founder of Marie Adelaide Leprosy Centre in Karachi, where she was being cared for at the time of her death after a short illness.

Pakistan President Mamnoon Hussain attended the state funeral service at St Patrick's Cathedral in the city, where hundreds of people gathered to pay their respects.

The casket, draped in the national flag, was carried by army personnel and Marie Adelaide staff and given a 19-gun salute.

"The entire Pakistani nation pays homage to Dr Pfau's extraordinary work. She will always be fondly remembered. We have lost a national hero," Pakistan's foreign office

Working with the government, Pfau expanded leprosy treatment centres in more than 150 cities and towns across Pakistan, training doctors, treating thousands of victims and helping establish a national programme to bring the disease under control.

She was honoured by the state with the country's two highest civilian awards, the Hilal-e-Imtiaz and the Hilal-e-Pakistan.

Prime Minister Shahid Khaqan Abbasi earlier expressed his sadness at her death, saying "she may have been born in Germany, but her heart was always in Pakistan".

It was after the horrors of World War II in her native Germany that Pfau decided to dedicate her life to serving humanity, becoming a doctor and joining the Daughters of the Heart of Mary order, founded during the French Revolution.

Not required to take the veil or live in seclusion, she ended up in Pakistan by chance. En route to work in India, visa complications forced her to break the journey in Karachi, where she visited a lepers' colony.

Pfau was also praised for her work in helping victims of devastating flooding in 2010, which left millions of people homeless across swathes of the country.