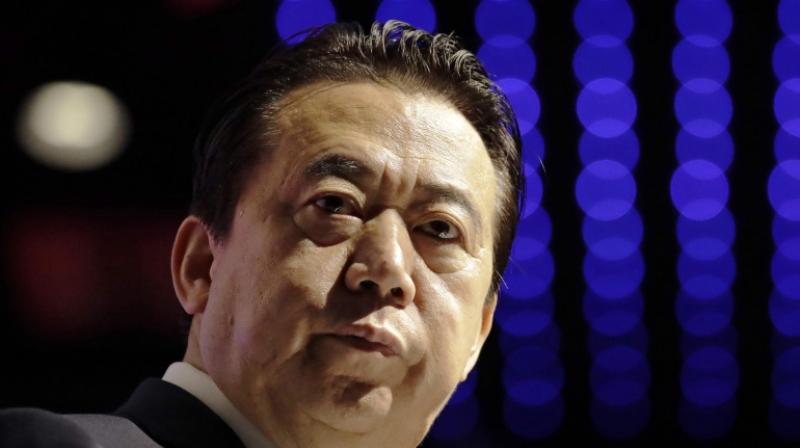 Beijing: Former Interpol chief Meng Hongwei pleaded guilty at a trial in China on Thursday to accepting USD 2.1 million in bribes - a remarkable fall from grace for the former vice minister of public security.

The Tianjin No 1 Intermediate Court said Meng "showed repentance" during the hearing, which was the culmination of a dramatic case that shook the international police organisation and put a spotlight on China's opaque judicial system.

The verdict will be announced at a "select date or time", said court in northern China in a statement, without specifying further.

His hair had greyed and he appeared gaunt compared to photos from 2017.

Meng is among a growing group of Communist Party cadres caught in President Xi Jinping's anti-graft campaign, which critics say has served as a way to remove the leader's political enemies.

Over one million officials have been punished so far during Xi's six-year tenure.

Meng vanished last September during a visit to China from France, where Interpol is based, and was later accused of accepting bribes and expelled from the Communist Party.

The court said that between 2005 and 2017 Meng used his status and positions, including as vice minister of public security and Marine Police Chief, to accumulate bribes equivalent to some 14.46 million yuan (USD 2.1 million).

As vice security minister, Meng oversaw a number of sensitive portfolios, including the country's counter-terrorism division, and he was in charge of the response to violence in China's fractious northwestern region of Xinjiang.

During Meng's tenure, China's public security bureau also arrested and interrogated a number of prominent Chinese dissidents, including Nobel Peace Prize laureate Liu Xiaobo, who was imprisoned and died of liver cancer while under police custody in 2017.

At Interpol, Meng was expected to serve a four-year term until 2020. His election in 2016 had raised concerns among human rights groups which feared that Beijing would use the organisation to round up Chinese dissidents overseas.

But since his expulsion from the Communist Party, China's powerful Public Security Ministry has sought to distance itself from Meng.

In March, the ministry said that Meng's "poisonous influence" had to be "thoroughly eliminated", and that it was investigating other party cadres involved in Meng's case.

The former Interpol chief's wife Grace Meng and their two children are still in France, where they were granted political asylum in May.

In French media interviews, she has said she fears for her life, and was afraid she and her children would be the targets of kidnapping attempts.