US hails Taiwan as a model against China

Taiwan fears of a major impact, if Beijing comes to view its complex relationship with it through the lens of growing tensions with US 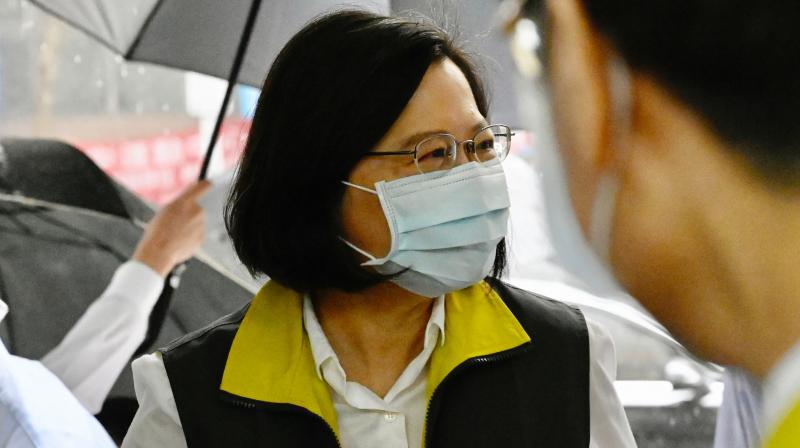 Taiwan President Tsai Ing-wen arrives during her visit to the Centers for Disease Control (CDC) in Taipei. (AFP)

Washington: With its remarkable success in fighting the coronavirus and its democratic values, Taiwan is enjoying a groundswell of support in the United States whose leadership is eager to hold up the island as a model against China.

Experts, however, doubt there will be a major impact for Taiwan -- and fear the robust US backing could even backfire if Beijing comes to view its complex relationship with the self-governing island through the lens of growing tensions with Washington.

Some US officials sense a shift in Taiwan's long-polarized politics with the resounding re-election of President Tsai Ing-wen, who rejects Beijing's idea that the island belongs to "one China."

"Her courage and vision in leading Taiwan's vibrant democracy is an inspiration to the region and the world," Secretary of State Mike Pompeo said in a statement ahead of her second inauguration on Wednesday.

The sentiment is bipartisan, with presumptive Democratic presidential candidate Joe Biden writing a nearly identical message in a congratulatory tweet to Tsai: "Taiwan's thriving democracy and response to COVID-19 are an example to the world."

A day earlier, Pompeo issued a fiery condemnation of the World Health Organization for not including Taiwan in its annual meeting, with president Donald Trump threatening to withdraw from the UN body for allegedly not responding quickly enough to COVID-19.

Trump has relentlessly attacked the WHO and China, where the virus first emerged late last year, amid criticism of his own handling of the pandemic in the United States, whose death toll of nearly 92,000 is by far the world's highest.

China considers Taiwan, where the mainland's defeated nationalists fled in 1949, to be a province awaiting reunification -- by force if necessary -- and has sought to exclude it from international organizations.

Taiwan, despite its proximity and commercial ties to China, has recorded just seven COVID-19 deaths after an early, aggressive approach that included mandatory quarantines for everyone entering the island.

Abraham Denmark, the director of the Asia program at the Woodrow Wilson International Center for Scholars, doubted China was overly concerned with US statements at this point.

China still succeeded in keeping Taiwan out of the World Health Assembly while mollifying criticism by accepting an eventual WHO probe into the pandemic's origins, he said.

"The danger is if either Washington or Beijing begin to see Taiwan primarily through the lens of their burgeoning strategic competition," Denmark said.

"If that happens, Beijing would be more likely to act aggressively against what it perceives to be efforts by Washington to use the Taiwan issue to split the PRC (People's Republic of China), undermine the Chinese Communist Party and contain China's rise," he said.

The Trump administration has gone on the offensive against China on multiple fronts, from trade to defence to the race for fifth-generation internet.

Despite hailing Taiwan, the Trump team maintains the four-decade US position of recognizing only Beijing -- although US law requires arms sales to Taiwan to ensure its defence.

"At the same time, the international community may grow more willing to engage Taiwan along similar lines of the unofficial US-Taiwan relationship as a result of Taipei's superb performance during the pandemic, despite poor treatment from Beijing," he said.

After years of assiduously courting US politicians, think tanks and journalists, Taiwan has achieved the increasingly rare feat of enjoying enthusiastic support across the political spectrum in Washington.

Biden's Democratic Party is additionally drawn to the progressive principles of the Western-educated Tsai, one of Asia's most vocal champions of gay rights.

Congress unanimously passed an act in March that makes it US policy to advocate for Taiwan's inclusion in international organizations.

Ryan Hass, who was former president Barack Obama's top adviser on China and Taiwan, said the Trump administration weakened its leverage at the WHO by threatening to end all US funding.

He said the "principled stand" on behalf of Taiwan at the WHO was consistent with longstanding US policy and unlikely to affect cross-strait relations.

But the United States ultimately cannot deliver for Taiwan at international organizations unless China agrees, he said.

"Beijing has in the past allowed for such arrangements and treated its posture on such questions as leverage to try to influence Taiwan's politics," said Hass, now a fellow at the Brookings Institution.

Elizabeth Economy, a senior fellow at the Council on Foreign Relations, said that Taiwan always enjoyed broad support in Washington but that previous administrations worried about undermining the "precarious balance" between China, Taiwan and the United States.

"The Trump administration is not concerned with historical precedent," she said.

"Taiwan's exemplary performance in response to COVID-19 pandemic has only elevated its standing in the US government."