This simmering anti-establishment sentiment is waiting to be tapped by a credible outsider. 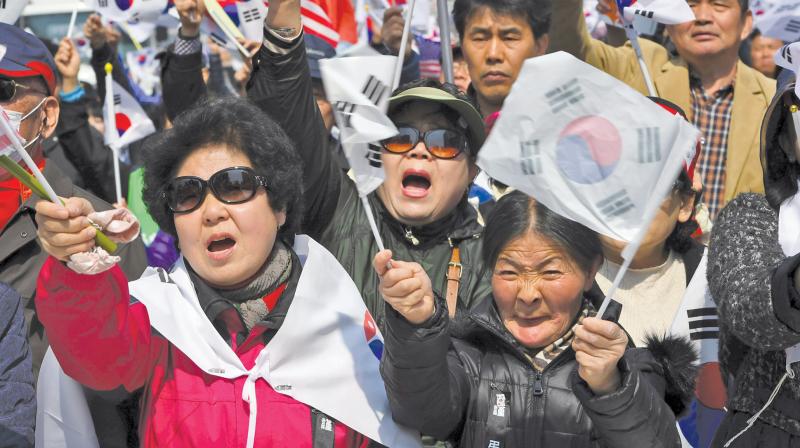 Supporters of South Korea’s impeached ex-President Park Geun-Hye wave national flags during a rally demanding a repeal of the impeachment in Seoul on March 18. (Photo: AFP)

On March 10 the South Korean Constitutional Court unanimously upheld last December’s impeachment of President Park Geun-hye by the Korean National Assembly. This has created a power vacuum in Korea which has a presidential system of governance. A new President will be elected on May 9 on a first-past-the-post basis.

The era of real multi-party democracy in South Korea with free and fair elections dawned with the advent of the sixth Republic in 1987. Disgusted by the machinations of past Presidents to extend their rule by brow beating the National Assembly, the revised Constitution mandated only one five-year term for the elected future Presidents.

Since 1987, all the six Presidents of ROK have been well-known personalities with high profile careers in political or corporate world. Gen. Roh Tae-woo got elected in 1987 due to a split in votes between the two crusaders for democracy Kim Young-sam and Kim Dae-jung and was succeeded by these two well-known Kims. President Roh Moo-hyun (2002-2007) was a prominent human rights lawyer and pro-democracy activist. His successor Lee Myung-bak earned his laurels as CEO of Hyundai E&C and as mayor of Seoul in 2002-2006. President Park Geun-hye’s political career was promoted by the supporters of her father, the formidable Park Chung-hee, who was the iron-fisted authoritarian ruler of South Korea for 17 long years till 1978.

The prominent faultline in South Korean polity is between conservatives and liberals of various hues. Conservatives are pro-US, more accommodating towards Japan, strongly anti-North Korea and advocates of a merit-based competitive society. Liberals, on the other hand, are largely anti-Japan, wary of US, critical of the unfair practices of Chaebols and advocates of a soft policy towards North Korea and China.

In the 300-member National Assembly, Park Geun-hye’s Saenuri (New Frontier) Party has 95 seats. Its splinter conservative Bareun Party has 32 seats and Democratic Party has 121 seats. A centrist People’s Party founded by maverick politician Ahn Cheol-soo has 38 seats. 55-year-old Ahn Cheol-soo is a businessman, software entrepreneur and a late entrant to politics. He was a candidate for 2012 presidential election but withdrew so as not to split the liberal anti-Park Geun-hye vote. He had declared his support for democratic candidate Moon Jae-in, who lost by a narrow margin. Since then, Ahn Cheol-soo’s Peoples’ Party has emerged as an anti-establishment centrist force attracting support from both right and left. Ahn has also been projected as the Bernie Sanders of South Korea.

For the liberals and the Democratic Party, the best bet would be re-nominating Moon Jae-in as he has high name recognition all over the country and has impeccable liberal credentials. He was a human rights lawyer and Chief of Staff of late President Roh Moo-hyun. His election would, however, usher a shift in South Korean policies. Moon is likely to pursue closer ties with North Korea, review the installation of US-backed missile system THAAD on South Korean territory and adopt a tougher line against the questionable practices of Chaebols such as Samsung and Hyundai.

In the opinion polls, Moon Jae-in is a clear frontrunner followed by another liberal from the Democratic Party Ahn Hee-jung, governor of South Chungcheong Province. Ahn has already announced his candidature.

Conservatives are in disarray and steadily losing ground. Saenuri Party lost majority in the April 2016 parliamentary elections with the liberal opposition of Democratic Party and Peoples’ Party winning the majority. For the conservatives there is no obvious candidate after former UN Secretary General Ban Ki-moon dropped out of the race in end January. A few weeks back Ban Ki-moon was a clear frontrunner in the opinion polls but lost steam as he toured the country. Ban lacks charisma and could not project a clear break from the policies pursued by the outgoing Park administration. Another possible conservative candidate, Prime Minister Hwang Kyo-ahn, who has been serving as acting President since the impeachment of President Park last October has declined to enter the fray.

The continuing rage of Korean masses over the charges of impropriety and favouritism against President Park Geun-hye reflects a sense of anger and disquiet amongst the electorate. As in several other democratic countries, the middle class families are dissatisfied with their present situation and uncertain about the future of their children. In ROK youth unemployment is 8.4 per cent and is gradually rising. 69 per cent of 25-34 years old have a college degree and there are not enough white-collar jobs. Toiling under very long hours of work, the people hold the unholy nexus between Chaebols and politicians responsible for a very unequal Korean society with disproportionate power, wealth and influence among the few families controlling the Chaebols. Another riveting drama is around the travails of Samsung group heir Lee Jae-yong deeply embroiled in the presidential corruption scandal.

This simmering anti-establishment sentiment is waiting to be tapped by a credible outsider. The progression of political beliefs, collective aspirations and ideological convictions in democratic societies is neither linear nor predictable. The masses in South Korea seek a high level of integrity in their President and also an assurance that the Korean economy would continue to be led on a path of greater prosperity but with a more equitable society.

As the conservatives have been ruling for the last nine years, the Korean electorate’s expectations and aspirations would resonate better with a credible liberal or centrist candidate.

The lame duck conservative government is rushing ahead with the installation of THAAD anti-missile system in the face of open and aggressive opposition from China. Democratic Party is pressurising the government to seek parliamentary approval for the installation of THAAD batteries on Korean soil. If the liberals have their way the deployment of THAAD is likely to be delayed, if not stopped altogether. This would certainly provoke the Trump administration. As South Korea is India’s “Special Strategic Partner” the forthcoming elections would be watched with keen interest in this country.

The writer is a retired ambassador