No handcuffs for Samsung chief 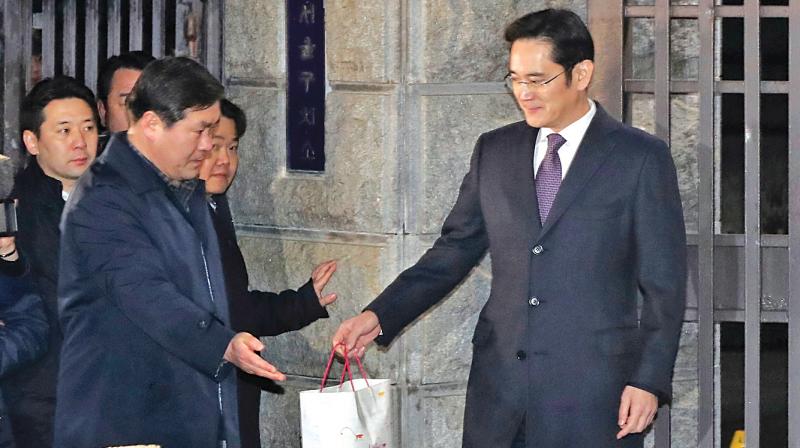 Seoul: A South Korean court on Thursday dismissed an arrest warrant against the head of Samsung Group amid a graft scandal that has led to the impeachment of President Park Geun-hye.

The judge said that an arrest was not necessary, for now. “After reviewing the contents and the process of the investigation so far ... it is difficult to acknowledge the necessity and substantiality of an arrest at the current stage,” he said.

But the reprieve for Jay Y. Lee, 48, may only be temporary, as the special prosecutor’s office said it would pursue the case.

Mr Lee, who has led Samsung since his father, Lee Kun-hee, suffered a heart attack in 2014, was still likely to face the same charges of bribery, embezzlement and perjury, legal analysts said, even if he is not detained.

Mr Lee left the Seoul detention centre without talking to reporters, having been held overnight as the court deliberated whether to grant the arrest warrant.

“We will consider necessary measures and continue with the investigation without wavering,” special prosecution spokesman Lee Kyu-chul said.

The office said it had not decided whether to make another arrest warrant request. Mr Kyu-chul said the prosecution was unconvinced by the Samsung chief’s argument that he was a victim of coercion due to pressure from Park.

The spokesman also said Samsung Group vice-chairman Choi Gee-sung had been classified as a suspect on suspicion of bribery. Two other Samsung officials, Choi’s deputy Chang Choong-ki and Samsung Electronics executive Park Sang-jin, were also under investigation. The office has accused Mr Lee of paying multi-million dollar bribes to Park’s confidant, Choi Soon-sil to for a controversial 2015 merger of two Samsung Group affiliates.