Rescuers located the plane debris soon after. All 13 bodies have been recovered according to the air force. 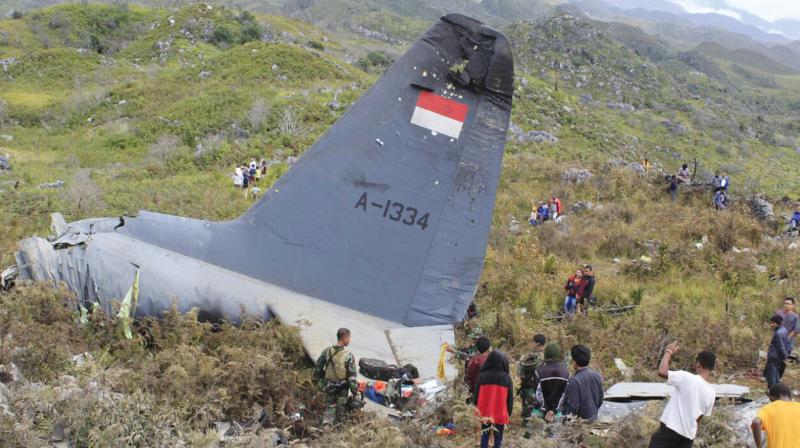 Rescuers collect personal belongings of the victims of an Indonesian Air Force plane that crashed in in Wamena, Papua province, Indonesia. (Photo: AP)

Jakarta: Thirteen people have died after an Indonesian military transport plane crashed in the east of the country on Sunday, officials said, marking yet another air accident for the armed forces.

The Hercules C-130 plane took off from Timika city in Papua province carrying 12 crew and one passenger, but came down in a remote mountainous region shortly before its scheduled landing, officials said.

“The operator on land saw the plane at 06:08 am local time but at 06:09 am the plane had lost contact,” air force chief Agus Supriatna said.

The plane was expected to land at 06:13 am local time.

Aboard the aircraft were three pilots, eight technicians, a navigator and a military officer, as well as food and cement, Mr Supriatna said.

Weather around the area is known to be unpredictable, and the plane went in and out of clouds before the crash, he added.

Rescuers located the plane debris soon after. All 13 bodies have been recovered according to the air force. Mr Supriatna said a team was heading to the site to investigate.

The fatal incident is the latest for Indonesia’s accident-prone military.

In November an Army helicopter accident killed three on Borneo, while another three died when a military chopper went into a home in Central Java in July.

Some 12 people were killed in March when another military helicopter went down in bad weather on Sulawesi in central Indonesia.

But the worst incident in recent times was in June 2015, when an air force Hercules C-130 plane crashed into a residential neighbourhood in the city of Medan, killing 142 people and causing widespread destruction.