‘Bottom line is that people are trying to figure things out as they go," said one of the protesters camped outside Hong Kong's legislature. 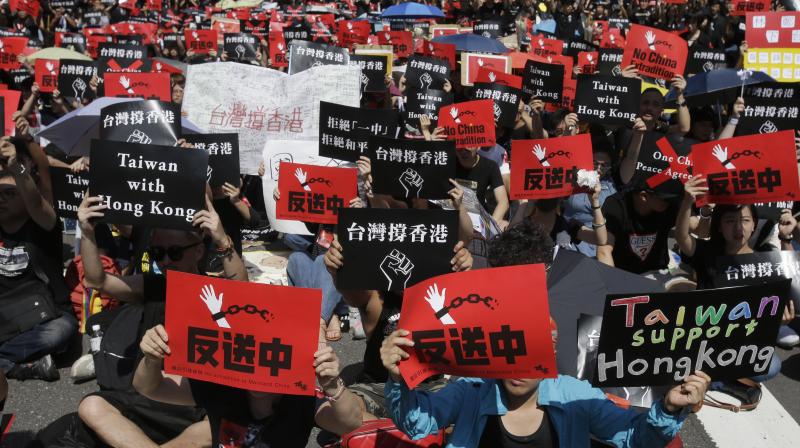 So far, no fresh protests have been announced, but small groups of die-hard activists remain in the streets around the city's legislature, setting up supply stations with water, food and first-aid kits in anticipation of future mobilisation. (Photo: AP)

Hong Kong: Hong Kong's "leaderless" demonstrations brought millions of people onto the streets and forced the city's pro-Beijing leadership into a rare climb down.

But with no one directing the action, where does the movement go now? The unpopular bill that sparked the protests and would have allowed extradition to mainland China has now been suspended. But protesters are adamant that the bill must be fully withdrawn and the city's pro-Beijing Chief Executive Carrie Lam step down -- demands she has so far resisted.

"More demonstrations and resistance will happen soon if Carrie Lam does not know what respect means," said Joshua Wong, an activist who became the face of Hong Kong's 2014 pro-democracy "Umbrella Movement".

Wong was released on Monday, half-way into a two-month sentence linked to his activism, and a day after organisers said two million demonstrators marched in Hong Kong's streets to protest against the bill. He told AFP he now expects to see "upgraded, more progressive actions".

So far, no fresh protests have been announced, but small groups of die-hard activists remain in the streets around the city's legislature, setting up supply stations with water, food and first-aid kits in anticipation of future mobilisation.

The massive demonstrations were organised in part by a coalition called the Civil Human Rights Front, an umbrella group of dozens of organisations. While the group applied for rally permits, it has said it does not speak for the protesters and has given no indication of future demonstration plans.

Wong said the movement's leaderless nature was part of the reason for its success. "The leaderless model enhances the movement to become more organic. It (becomes) hard for the regime to target any representative, icon or leader," he said. In the past, "when we organised (a) strike or movement, they will try... to target the leader, negotiate with them", he added.

That was the experience of 2014's Umbrella Movement, which failed to win democratic concessions and landed several of its top leaders, including Wong, in jail. The new movement's leaderless model though has left many unsure of what to do next.

"The bottom line is that people are trying to figure things out as they go," said Laurie Wen, a writer among the protesters still camped outside Hong Kong's legislature. The Umbrella Movement "didn't get us what we wanted in terms of policy demands at least. So what are we going to do differently this time? How can we use our... two-million-strong power?" Hong Kong enjoys freedoms unseen in mainland China under the terms of its 1997 handover by Britain, but there are concerns that the territory's special status is under threat from Beijing, which will retake control of the financial hub in 2047.

Activists have long sought more say in particular over their leadership -- the city's executive is chosen by Beijing, which has thrown its support behind Lam even while distancing itself from the extradition bill. "This goes back to the Umbrella Movement, that's what it's all about: the election, not selection, of the Chief Executive," said Claudia Mo, an opposition lawmaker.

"She cannot be ousted from the office by the people as such, she can only be ousted by Beijing, her big boss." Even with little sign their demands will be met, activists are keen to keep up the pressure. "On the one hand, we feel it's almost impossible to get... what we want because they won't listen to us," said protester Wen.

"But on the other hand, we have the freedom to protest and occupy without being killed." And they believe their movement will continue to win public support. "The people are still mad as hell," opposition lawmaker Ray Chan said Tuesday. "People will take to the streets again in massive numbers and keep enormous pressure on the government until Carrie Lam steps down and the extradition to China bill is completely withdrawn."